In a recent episode of Fast Forward – a new webcast run by boutique consultancy The Catalysts – I was given the opportunity to reflect on my experience as CEO and Co-founder of FilmDoo, while sharing my thoughts on the ability of film to connect the world and inspire cultural change.

FilmDoo launched in 2015 as a site aimed at helping people to discover great movies from around the world while giving a platform to stories and voices that rarely get the international exposure they deserve. Drawing from my own Thai background, we chose to name the company “FilmDoo”– which means, “to watch or see a film,” in Thai – as a way of emphasising the platform’s global, multicultural focus and outlook from the very beginning.

Cut to the present day and we now have one of the world’s biggest international film catalogues, spanning more than 80 countries across a variety of genres and themes. We continue our efforts to give an international platform to LGBT stories, female directors and first-time filmmakers struggling to get their movies seen through traditional distribution.

But while FilmDoo remains a truly global entertainment platform, we have also expanded into what we now call an “edutainment” platform, with the aim of helping people to learn languages and explore different cultures through film. We’ve developed a new gaming technology that can be used to create interactive learning courses based on our films and other online videos. Now more than ever, we feel it’s important that we find new ways to promote diversity and cross-cultural understanding while helping to level the playing field for international distribution. 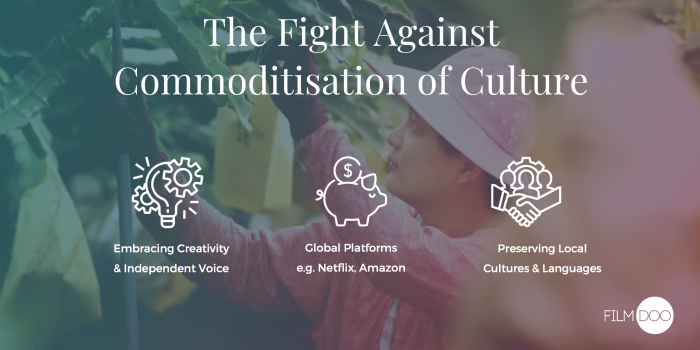 In recent years, we’ve seen a rise in what we call “the commoditisation of culture” on major streaming services. The biggest VOD platforms are beginning to produce more and more of their own original content, often to the detriment of truly independent filmmakers. As global players commission content designed to bring in the largest international audience possible, local cultures and creatives are being left by the wayside with little to no exposure outside of their home countries. 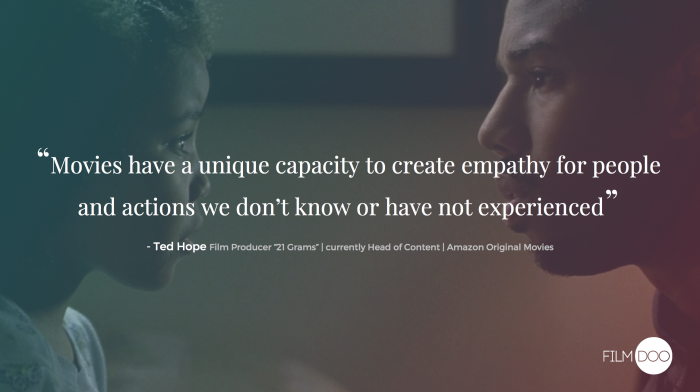 This is why I feel it’s so important that FilmDoo continues to do its part in helping people discover and appreciate this breadth of culture and languages. As 21 Grams producer Ted Hope once put it, “Movies have a unique capacity to create empathy for people and actions we don’t know or have not experienced.” Cinema has the ability to shift perspectives and even transform lives. They can draw attention to pressing contemporary issues and affect us on a deep, emotional level while inspiring debate, discussion and self-reflection. The impact of the documentary Blackfish, for instance, resulted in SeaWorld eventually dismantling all their killer whale shows. 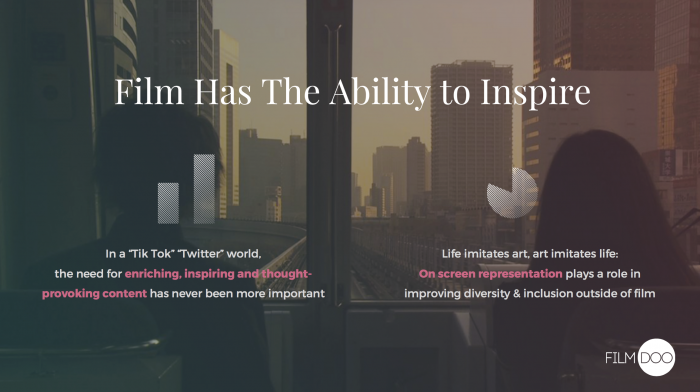 Another phenomenon we’re seeing right now is the online trend towards short form content. As major international streaming services expand their influence on the production of long-form content, social media sites offer entertainment in the form of increasingly short snippets and clips. In the age of TikTok and Twitter, there remains a need for more ambitious, independently produced content that is inspiring, thought-provoking and memorable beyond the moment of consumption.

There is another reason why we need a diverse range of independent cinema. You’ve probably heard it said that life imitates art and art imitates life, and this holds especially true for film. It is in movies that people can find role models and ways of life that they can aspire to, and that is why films play an important part in inspiring inclusion, influencing cultures and shaping our perception of the real world. 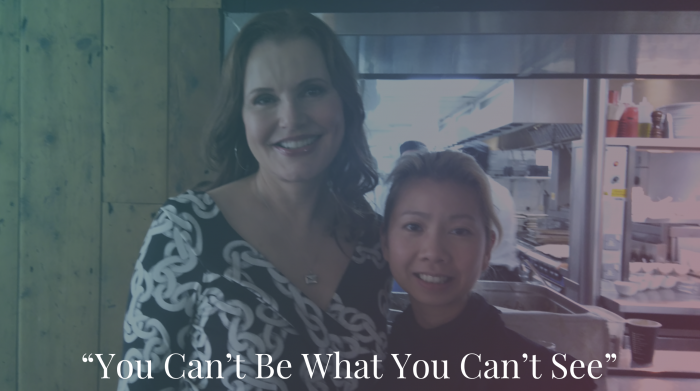 A few years ago, I was lucky to meet Geena Davis, who’s not only a famed actress but also an activist for on-screen representation. For the last two decades, the Geena Davis Institute on Gender in Media has carried out pioneering research on the representation of women in films.

In recent years, the Institute has found that male characters still have around twice the amount of screen presence as female characters in major releases. But what I really find striking is how the representation of women on screen in proportion to men is often mirrored in the ratio of women to men found across numerous fields and industries, including politics, engineering, media and law. Why is this? It’s because you can’t be what you can’t see.

Through cinema, not only can we evoke the pressing issues of our time, but we can also offer a representation of the future we want. This goes especially for children, who are particularly susceptible to what they see on screen. In films, we can find visions of a reality worth emulating, serving as the template for change in the real world. 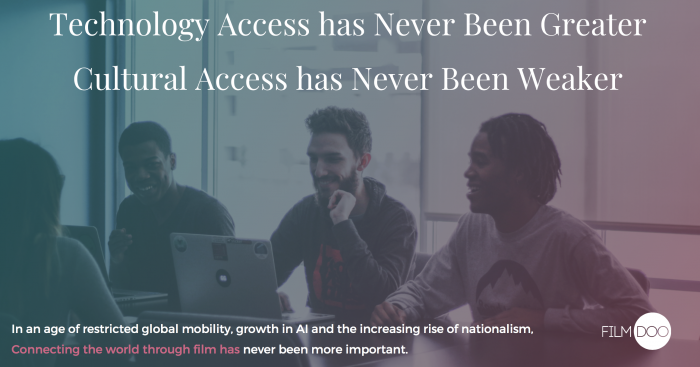 Right now, it feels like we’re living in a paradoxical time. On the one hand, technology – and our ability to access it – has never been greater. But at the same time, cultural access has never been weaker. In some ways, it’s now easier than ever to lose touch with our cultural heritage, especially with current events keeping us indoors and limiting our ability to travel as a result of the COVID-19 pandemic. Meanwhile, with the rise of nationalism around the world, it has become even more crucial that we find ways to break down the barriers between us, and one great way of doing this is through film. 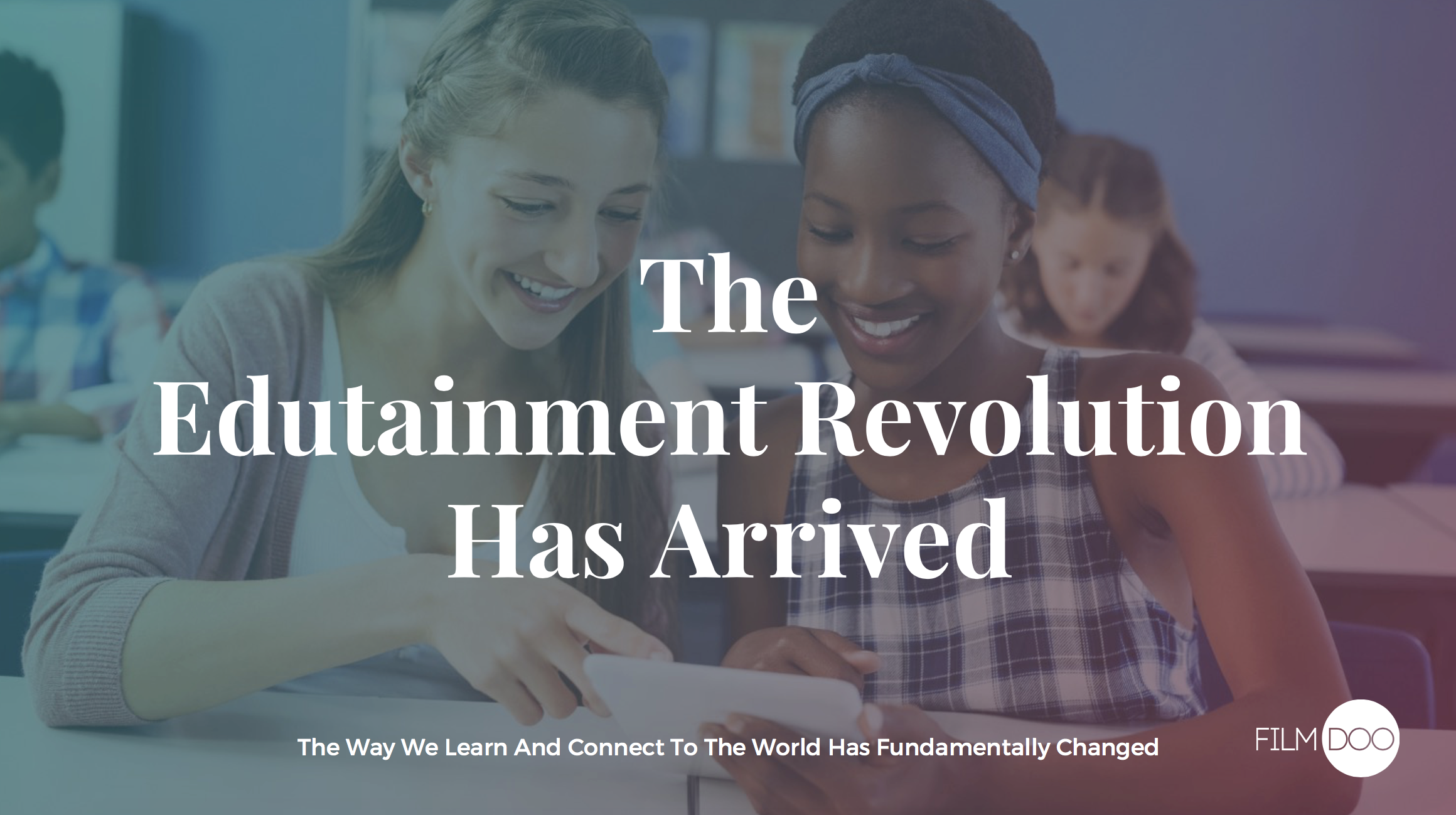 Having lived in over eleven countries across five continents, one thing that continues to amaze me is just how similar people are everywhere you go. Though the cultures will vary, people are fundamentally driven by the same things in life, be it love, success, family, friendship or spirituality. And while cinema is often a powerful medium for exploring cultural differences, films can also inspire empathy and understanding by helping us to realise the similarities that unite us.

Through the rich narratives of film, we find a means of connecting to our past and our present while sketching out a vision of the future. Increasingly, cinema is helping us to explore and understand the changing world around us, all while providing us with compelling stories to be passed from generation to generation. It is for these and other reasons that movies can play a critical role in what I would like to call the Edutainment Revolution.