VIRTUAL REALITY: EXPANDING THE BOUNDARIES FOR IMMERSING IN AND EXPERIENCING CONTENT

“We like to think of virtual reality not as a medium to actually create horror stories and heavy adrenaline-driven emotions, but rather to use it as a way to enhance the human experience”

Virtual reality (VR) is the new frontier in entertainment. It’s been continually utilized in the gaming sector by leading companies like Qualcomm and PlayStation, ushering in fresh actualities of unforeseen experiences. They have created new unprecedented heights of intensity and life-like immersions into magnificent new worlds where the player is forced to act in previously unimaginable ways. With plug and play, the games are able to instantly transport the player to the Star Wars Battlefront or RIGS Mechanized Combat League.

The virtual experience is so real that now several filmmakers, including many of Hollywood’s top directors, are signing in to join a virtual wagon of movie making. Simulation brings the viewer into the midst of it all. Rather than viewing from a distance, the viewer sees what the character sees. They experience being there, rather than merely viewing it all from afar.  It’s been several years since VR films, games and exercises were first featured in festivals, most notably, Sundance and South by Southwest Interactive (SXSW).  Virtual Reality is an immersive encounter, a whole new experience in filmmaking and watching films. The future is no longer about viewing content, it has become more about experiencing and being part of that universe.

Compared to sitting in a theatre, even an IMAX theatre, VR technology today is much more advanced and many film scripts are now being penned to include the possibility of the movie being shown using Immersive Technology.

Virtual Reality has found a new niche in documentary filmmaking. The film Welcome to Aleppo uses VR technology to bring audiences into the lives and struggles of refugees in war-torn Aleppo, Syria. Christian Stephen, filmmaker, photographer and videographer, has been exerting great effort, and even jeopardizing himself and his team mates, in order to help people comprehend the actual strife and human degradation that fill such nations. In Welcome to Aleppo, viewers step into the shoes of a Syrian female, standing in the middle of what used to be a busy Aleppo Street, probably a market street where people converged, haggled, laughed and spoke with each other, to witness and experience the devastation.  Stephen teamed up with Syrian journalist, Adnan Hadad to present a documentary which placed the audience at the urban frontline of the civil war in the country.

Stephen is the global editor of RYOT Productions, the brainchild of two humanitarian aid workers, also filmmakers, that navigates the possibilities of VR technologies in documentaries. The ultimate objective of the filmmakers documenting current events is to immerse us into the scene and allowing people to experience the scale of the event, be it war, natural catastrophes, or accidents. It is difficult to appreciate the actual, full scale magnitude of the event through 2D films.  In comparison, VR is able to capture this scale by effectively transporting the viewer to the scene itself. Aside from Welcome to Aleppo, RYOT Productions also produced a film on the aftermath of the recent earthquake in Nepal. 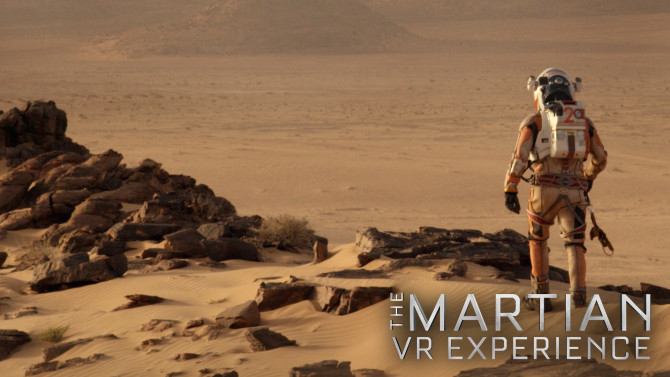 The Martian VR Experience and Wild – The Experience are the only live action virtual reality films to date.   Most VR films are still animation.  Life on Mars: The Martian VR Experience is an offset of The Martian (2015), Ridley Scott’s film starring Matt Damon. The VR film was directed by Robert Stromberg and produced by 20th Century Fox through Fox Innovation Lab.  In the VR film, the viewer is placed in Mark Watney’s shoes as the astronaut stranded on Mars. Participants are able to approach the film as either an observer, taking part in various tasks and events, or merely as an observer. It can be an exhilarating experience to be to participate in certain tasks, such as throwing potatoes into the bucket (which ended up being was what helped Mark to survive) and lifting solar panels with a crane. The fact that these tasks immerse the viewers further into the scenes helps VR to create a more authentic, genuine experience than watching IMAX or movies through 3D glasses.

In Wild – the Experience, viewers are transported into the nature scenes of the film Wild, which starred Reese Witherspoon as a trekker, and is based on the book by Cheryl Strayed about her experience in trekking the Pacific Crest Trail. In this VR film produced by Felix and Paul Studios, viewers are transported into the peaceful stillness of nature while watching Reese walking towards the viewers and sitting close completely unaware of the viewer’s existence in the scene.

Virtual Reality film can replicate human experiences, whether it’s sitting calmly on a rock gazing at a star or walking through the devastations of war. The integration of the VR technology into films is still at its infant stage, primarily because content for VR films are hard to conceptualize and work on. There’s still so much to learn about human behaviour and reactions once immersed into another reality.

VR gears such as Oculus Rift, Samsung-Oculus Gear VR and Project Morpheus by Sony are now available on the mainstream market.  But, as VR technology is still at the early stages, price, availability and ergonomics are still in question prohibiting the majority of people from discovering the wonders of VR content.  Still, it is without doubt that the VR movement has started. A new way of immersing and experiencing content is now before us and a new definition of “˜reality’ must be explored.

This entry was posted in BUSINESS, Features and tagged The Martian, VR, Welcome to Aleppo, wild. Bookmark the permalink.