An Australian production by first-time New Zealand director Miro Bilbrough, Being Venice follows the exploits of a woman adrift in life, not yet middle-aged but older than her innocent attachment to men and unsettled living situation might suggest. Beautifully shot in locations carefully chosen as an homage to the painter Edward Hopper, the charming aesthetic of Bilbrough’s feature film debut makes for memorable viewing.

The story follows Venice (Alice McConnell) during a visit from her long-absent father Arthur (Garry McDonald), who sets up camp on her sofa in the aftermath of an awkward break-up. As Venice turns to her ex-boyfriend Lenny (Simon Stone) for emotional support, she intrudes upon his own relationship with health fanatic Irene (Katie Wall). 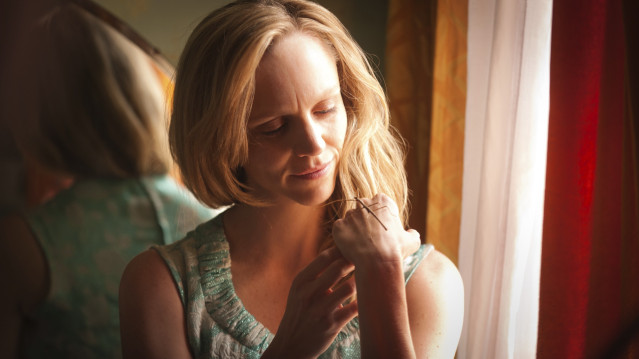 Alice McConnell’s portrayal of Venice is absorbing, finding a perfect line between allowing the audience to identify with her and surprising them with acts of emotional immaturity and melancholic swings. But it is Arthur (Garry McDonald) whose role is the most satisfying. His grumpy senility initially adds a welcome element of humour, but becomes more worrying as we realise that the same process of ageing that has left him bemused by the modern world is the same fundamental change in personality that has left Venice feeling even more adrift, unable to identify this grey-haired grump with the carefree hippy whom she remembered from childhood.

Being Venice is a pretty picture, united by leitmotifs which crop up at key points in the story. Recurrent visions of ants and honey give the audience access to the quirks of memory and mental associations brought up by the return of Venice’s father into her life, just as the post-it notes on which she scribbles unusual ideas invite us into the more charming portion of her otherwise depressive mind. If that seems like too neat a storytelling trick, Bilbrough deftly and disarmingly acknowledges it with the final shot, as Venice dashes off a note capturing her emergence from the dark period in her life: ‘The End’.

Being Venice presents a compelling portrait of romance, family tensions and bohemian living, beautifully packaged by director Miro Bilbrough, designer Alexander Holmes and cinematographer Bonnie Elliott, which deserves a broader audience than it got with its initial release onto the art house circuit.

This entry was posted in OCEANIA, Reviews and tagged Australia. Bookmark the permalink.

One thought on “FILM REVIEW: BEING VENICE (2012, AUSTRALIA)”