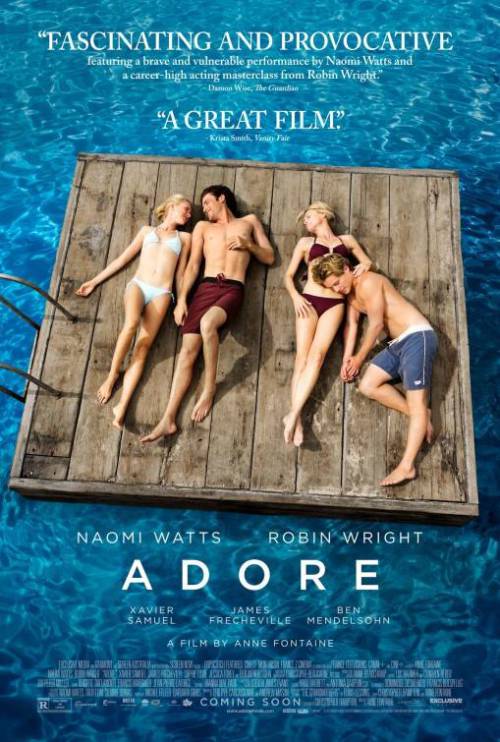 Not speaking from personal experience, wouldn’t one imagine the ordeal of sleeping with your best friend’s son, somewhat tumultuous and disturbing? Well, you might want to think again. Making its debut at last year’s Sundance Film Festival, and based on the novella ‘The Grandmothers’ by Doris Lessing, Adore invites you into the lives of two mothers and best friends Lil and Roz (Naomi Watts and Robin Wright respectively) as they embark on a journey of guilty pleasures in what would appear to be paradise, or pretty close to it anyways.

Shot on a 35mm Cinemascope, the story unveils itself in a transcendent secluded coastal area of New South Wales in Australia. Amongst breathtaking sandy beaches, summer breezes and turquoise waters, we follow the lives of Lil and Roz, best friends who have shared everything from secrets to sunburns since they were little, and their sons Ian (Xavier Samuel) and Tom (James Frecheville) respectively.

Now in their 20’s the boys have grown up best friends much like their mothers and with Lil’s husband having passed away years ago, and Roz’s husband Harold frequently away for work, the four of them are often together enjoying idyllic morning swims and late night dinners over wine. One night during one of the many usual sleep overs, Ian initiates the affair with Roz, and despite knowing that it is wrong, crossing that big line in the sand simply never looked so good.

Director Anne Fontaine captures the organic progression of both couples beautifully. Watts and Wright captivate and embrace their roles exquisitely, as 40-something mothers they emanate a refreshing and youthful vibrancy, a gentle vulnerability and simplicity which resonates spectacularly with the decadent backdrop. Adore depicts an intimate and intriguing tale of needs and wants all the while exploring our perhaps sometimes inability to let go. A truly enjoyable and captivating watch, refreshingly lead by a female cast.

Have you seen the movie? Would you do what Naomi Watts’ and Robin Wright’s characters do? Share with us your views in the comments below. 🙂

This entry was posted in OCEANIA, Reviews and tagged Australia, Drama, France. Bookmark the permalink.