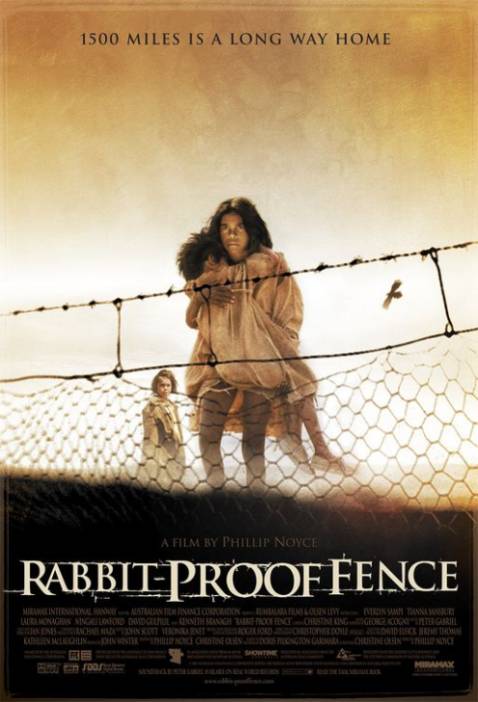 In Western Australia of 1931, a government policy includes taking “half-caste” (one white and one Aboriginal parent) children from the Aboriginal mothers and re-locating them to a re-education camp. A. O. Neville (played by Kenneth Branagh), who signed the order, reasons that the half-castes should be bred out of existence, and he believes that this camp will raise them as white and diminish their Aboriginal blood. Molly, a 14 year old girl, her 8-year-old sister Daisy, and 10-year-old cousin Grace, are forcibly taken away from their mother and sent to the camp. They manage to escape, and embark on a long journey, walking up a rabbit-proof fence that stretches along for miles, and they head in the north direction reaching back home to their mother and grandmother.

Rabbit-Proof Fence is based on true events, as the film is adapted from the book Follow the Rabbit-Proof Fence written by Molly’s daughter, Doris Pilkington Garimara. This is a story dealing with a racist policy, and the children known as the “Stolen Generation”, or “Stolen Children”, from the perspective of people who have experienced it at hand. At the epilogue, we see the actual Molly and Daisy who tell what happens after the events of the film. Although, without spoiling too much, it’s not “exactly” a happy ending (watch the film to see what I mean).

The film is about the three girls’ journey through the desert and willing to get back home. We’re able to sympathise with them as they’re taken away from a loving home, and their determination becomes very admirable, especially for their ages. While it’s mostly focused on the girls, the story cuts back-and-forth to Neville’s attempts to re-capture them. It explores themes of race and the control of one’s identity, as the government seems to believe that they are entitled to the Aborigines. Neville seems much more concerned about having a dominant race more than just seeing Aborigines as a danger to themselves. While it’s not hatred, he does see the Aborigines as a threat against maintaining a dominant racial status, and sees a mixed-race child as “contaminating” the Australian society, describing them as an “unwanted third race”.

While the film deals with a harsh subject, about a policy that was surprisingly continued until the 1970s, the real focus is on the girls’ tale of returning home to their families, and enduring the long journey back.