Long before there was the international hit Les Intouchables, there was this rare gem of Dutch cinema – Simon (Dir. Eddy Terstall, 2004, Netherlands), which is in many ways similar to the award-winning French film. It is a surprisingly light-hearted film about a fantastically written character. 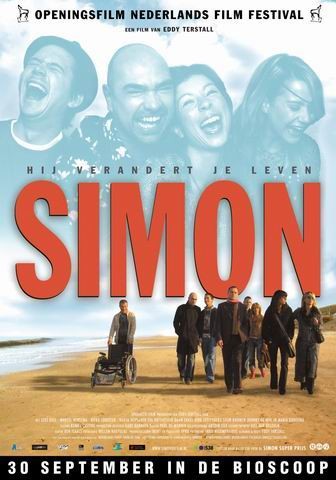 From the opening scenes, where the two main characters meet after a long falling out, we are told two stories. On the one hand, we flash back to the friendship building and falling apart between Simon, a semi-legal soft-drug-dealer with seemingly endless charisma, and Camiel, a fascinated-but-clueless-about-life student. On the other hand, we see the renewed friendship while Simon tries to fight cancer. It is the cut between the two stories that makes the story so digestible.

But is not just this that makes the story so fascinating. The film has a few interesting underlying themes, exploring Dutch society in the 80s-90s, referencing such “Dutch inventions” as gay marriage and euthanasia. You find yourself interested to ask the question why Simon is such an amazingly lovable character, while at times being racist, homophobic, and on the edge of what is legal or moral.

The character would have never worked without the actor, Cees Geel. Not all actors in Simon are at their best, but Cees Geel was just made for the part. He may always be remembered for this particular role, but I can imagine nobody else making this character work to this extent.

The film is not without flaws (and, being a Dutch film, not without needless nudity), but allow yourself to be charmed by Simon – the character, and the film.