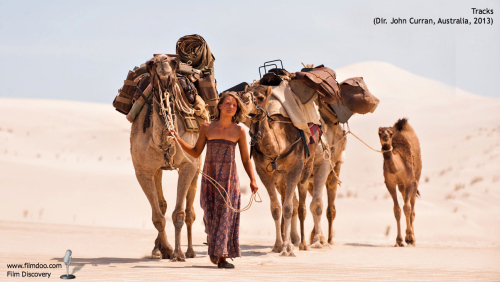 Tracks, an independent Australian film about Robyn Davidson – a woman who crossed 1,700 mile trek in West Australia with four camels and a dog – premiered in the UK in October during London Film Festival. John Curran and Iain Canning  shared with the audiences on the challenges, the casting and collaboration with Robyn Davidson for the movie.

Why did you choose Mia Wasikowska to be cast in the movie?

John Curran: There was no point in making this movie if the casting wasn’t absolutely right. I don’t even think we would got any financing, if it [casting] wasn’t really exciting. Somebody even said that Robyn Davidson was waiting for Mia to be conceived, be born and grow up and be right age, that’s why the film took so long to get made. We’re lucky she [Mia] was absolutely perfect. She and Robyn are so incredibly similar in personality, and you can see it in the pictures they kind of look alike.

Iain Canning: I remember reading a 1980’s copy of the [Robyn Davidson’s] book, and the back of it said “˜Soon to be a major motion picture’. And Mia wasn’t even born yet.

How much experience did Mia have with camels?

Iain Canning: Robyn tells that story of how when she first met Mia and they decided to practice, and Mia just went straight up [to the camels], almost like she does in the film, and Robyn said that from that moment on they were kindred spirits.

John Curran: I think a big part of Mia’s desire to do this film was the animals. What she didn’t realize was how exciting shooting in the desert would be. Sometimes the actors would be put half a mile away [from the camera] and we’d let them just be out there, alone. I did that a lot in this film, to give Mia that sense of isolation, and she would just be there with four camels and an unruly dog. She had to get them going, and I think she did amazingly well. Mia had no fear.

Did Mia and Robyn work together to bring out the main character on screen?

Iain Canning: I think, from Mia’s perspective, reading the book was really important, and, in terms of Mia’s life – she made films all around the world – she decided to base herself in Australia prior to making Tracks. When she read the book, she thought she’d be the only one who could feel that way [about the main character], and she wanted not just to meet that hero, but to own Robyn back in the day of the book, in the 70s. They talked a lot about the dynamic of the story, understanding the camels and the journey. Robyn herself was on set a couple of times.

John Curran: Robyn is a creative person, and she got on well around creative people. She wasn’t on set everyday, because she felt it would be very uncomfortable for Mia. She did not want to impose herself, she wanted to build a good relationship with Mia and just let her this role in her way.

How did you explore the character of Robyn Davidson during the course of the film?

John Curran: When I’ve read the book, I thought it was a first-person story, but there’s a lot between-in lines and things Robyn didn’t talk about. And I thought it was most interesting – the things she was eluding from the readers. Mia was equally interested in the chemistry of her [Robyn’s] character. For Robyn, it was a call to get off and be on her own, which caused quite a reaction at the time. So it was important to give it time and place [in the movie], to talk about this situation, but not to let this perspective to overshadow the story.

What were the challenges of the production?

Iain Canning: I think that the time it takes to get to places and the dynamic which we needed to shoot the places far from common understandings from civilization were a challenge. And also, to be able to define all those different looks and the magic of cinema, you have to sort of base yourself somewhere and to find all of those different moment of her [Robyn Davidson’s] journey. There’s also no artificial lighting in the scenes, which was yet another challenge.

John Curran: It’s getting out there that took us a lot of time of the day, so we really only 6 or 7 hours a day to shoot. And it was fast. It wasn’t that hard on me, but Mia had to go through long make-up changes, then go back on set and just jump and go. For her, it was crucial to maintain that sharp motional performance in the movie.

In what ways did you collaborate with indigenous community for the film?

John Curran: First, the actor [Roly Mintuma] who played Mr Eddie [in the film] is actually related to the real Mr Eddie, by sheer coincidence. We found him while scouting at indigenous community. We always met and talked to the members of indigenous community while filming there, and it was not just a matter of politeness. It was a matter of making deal [with them], to get their permission to film. We would talk about the film, and for the most part, they would help us to find extras and people to come along. Many of them were enthusiastic about it. There were a few times when we had to be really sensitive about what we were shooting there, sometimes we had to move somewhere else from a particular place of their land. But [indigenous community] was involved in the film, they were part of it.

How many animals did you use? How many camels were in the movie?

John Curran: We had four camels and a really good cameleer who’d cast the camels. A camel who played Dukey in the movie – his real name is Morgan – is easily the best actor, a most dependable one I worked with. We’d put a camera and say «Action!», and he would need no cue. Overall, the camels were great. And they had doubles, so we had the same camels visually which we put in the background and get it shot that way. The camels were easy – I mean, they were literally the most dependable thing we had [while filming], we made a great team. The dogs, on the other hand, suffered miserably, because they were black. They would only do two takes in the desert and then be like, «I’m done».

What can you say about the visual quality and the natural scenery of Tracks?

John Curran: It was a big reason to shoot this film – the opportunity to come back to Australia and do a story where the landscapes were a character in it. The idea was to have the landscape itself reflect the energy of what was going on. Our cinematographer Mandy [Walker] is a queen of using all available lighting, she can work really fast with practically nothing and do beautiful stuff. I felt safe being with her. Mandy has a great eye, she’s really good with balancing light, and she’s also one of the funniest people that I know. No matter how dire things could go, she would always make me laugh.

Iain Canning: Because of that move from film to digital film-making it might be one of the last films to be made or filmed in Australia.

John Curran: That’s true. Tracks might be the last ever film made on reel in Australia, one last film on film.

What was the most isolated place you filmed? What kind of crew you needed?

John Curran: Mostly, it would be a medium-size crew, definitely not a big crew but neither a small one. We had to get out to very remote places, sometimes for one, or three or four scenes, shoot there, then go half a mile and shoot something else. We were shooting at a couple of really big stations – we could literally drive across the property a whole day and still not see the other side of that property, which was about 5 thousand acres or something like that.

Where is that beautiful beach shown in the end of the movie?

Iain Canning: There was a lot of debate which beach we should use for filming, actually.

John Curran: Most of the film was shot in South Australia, and this particular beach is in Coffin-Bay. It’s a really amazing place. Hard to get there, though.

What does the real Robyn Davidson think of the film?

Iain Canning: I think that for Robyn it [the story] was almost transformed post-screening. It was very interesting for her to take herself out of the context, to see how she took Robyn in the film. It became an emotional journey each time she’d see it. On a couple of festivals, I thought she didn’t look that much different, but she felt very different. She’d hear audiences’ response to Tracks and walk out to discuss the movie, enjoying weaving through and listening to people’s opinions.

John Curran: When she saw the final version, she was kind of mortified at first – I guess it’s just a shock of seeing somebody playing you and doing similar things. After she got over that, I think she was relieved. From the beginning, it took us a while to get to a level of trust. She’d met a lot of filmmakers who were trying to impose their views of her story, or make it more action-adventure, and now she finally felt she was in good hands. We wanted to draw film from her and her material, she felt we were faithful [to her story], so there was certainly a feeling of relief. All the major events shown in the movie were straight from the book. How much Robyn loves it [the film]? She’s been to all festivals to watch it.

Tracks is now showing in Australia cinemas and will be out in the UK cinemas on April 25, 2014.