So far, Tracks has only debuted in film festivals around the world (nabbing nominations for Best Film at London and Venice). However, this is a film that people waited for more than 30 years. Based on a true story of Robyn Davidson, a woman who crossed 1,700 mile trek in Australian desert with only four camels and a dog, this film was in development long before its main star Mia Wasikowska was born, with Julia Roberts and Nicole Kidman attached to the project over decades. The films stands out as a story about the kind of people who never stop perceiving the world as a wonderful mystery to discover. In that regard, Tracks might fall in the same category with Into the Wild (2007): protagonists of both films are in search of the answers to their internal conflicts that separate them from society, and fearlessly follow their path all alone in the wilderness. 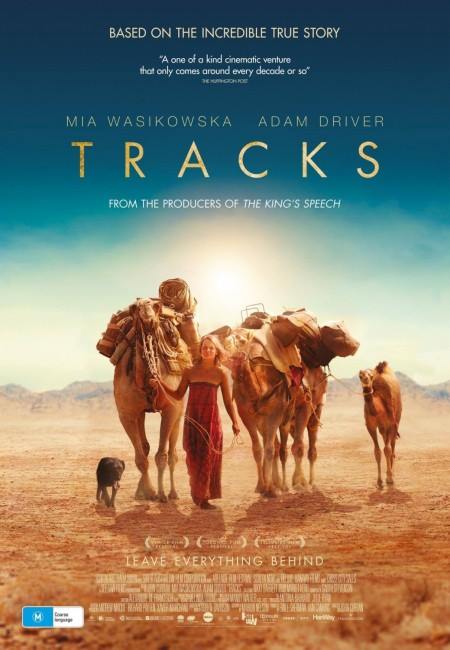 The role of Robyn Davidson challenged the lead actor Mia Wasikowska to literally become her character: going through the desert managing camels herself, wearing no hair styling, no make-up, and in some scenes, even no cloth. There was no glamour in playing Robyn, and Mia, who often appears sunburned, with weather-beaten face in the film, fully embraced it. Her performance sparks of genuine quality, carrying through the weight of the movie; Mia is absolutely transformed in the role of Robyn. In bringing the Robyn Davidson’s story to the big screen, the director John Curran stays truthful to it, letting the story unfold naturally, with no forced elements or unnecessary touches of melodrama.

Tracks was largely funded by See-Saw Films, with its co-founder Iain Cunning (Oscar winner for A King’s Speech) as one of producers for the movie. The film did justice both to the novel and Robyn Davidson’s character, showing her struggle to obtain and tame the camels, seeking sponsorship of National Geographic, and dealing not only with the wilderness, but with complicated childhood memories and unwanted publicity attention as well. Perhaps it is Robyn’s determination (captured in Mia’s performance) to make her dangerous journey what makes the story so intense even though the rhythm of the film might seem slow off the mark at times.

Tracks is something more than a truthful depiction of Robyn Davidson’s story. It is a confession of love to Australia, done beautifully by the dedicated cast and extraordinary cinematographer Mandy Walker, capturing breathtaking panoramas and the spirit of Australian desert.

Watch the trailer and read about our exclusive Tracks interview with Dir. John Curran here – http://filmdooblog.wordpress.com/2014/03/02/exclusive-interview-tracks-dir-john-curran-2013-australia/

This entry was posted in OCEANIA and tagged Australia. Bookmark the permalink.