The Circle is a docudrama telling the story of The Circle, a gay publication in Zurich in the 1940s and 1950s. In 1956, Ernst Ostertag (Matthias Hungerbí¼hler) is a schoolteacher concealing his homosexuality. After subscribing to the magazine he meets drag entertainer Robi Rapp (Sven Schelker) and they form a lifelong romance. During that time, The Circle is scapegoated for the murders of several gay men in the city.

There are interviews with real-life figures, primarily Ostertag and Rapp, who talk about their experiences, the history of the Circle, and the treatment of homosexuality during that time. These interviews cut back-and-forth with the dramatic depiction of the story, giving us an insight into the characters’ perspectives and adding a sense of realism to the tale. While it might seem unnecessary at first, it’s admirable that the film took both approaches instead of picking either just a documentary or just a period piece; it feels like the story is coming directly from these people, and the dramatic depictions are to portray these events as best and accurately as they can, as well as to fill in some gaps. Sometimes real locations transition to a flashback, or the other way around, and sometimes the interviewees describe what was in their head at that time. 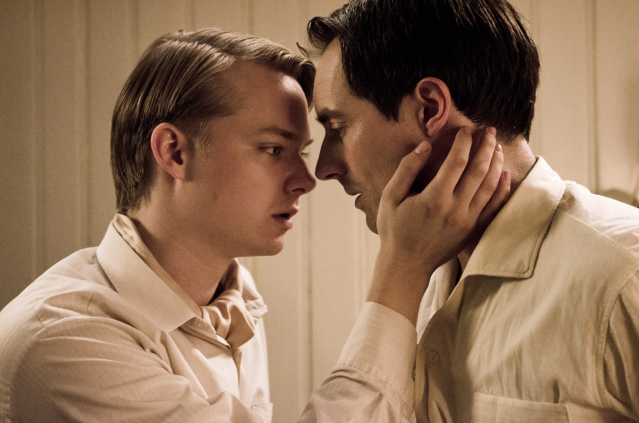 To these people, The Circle represented both freedom and a cage. Freedom to talk about and express their sexuality, but they are only really allowed to say it between each other, and not to the rest of the world. To make matters worse, attitudes haven’t changed, and constantly try to find ways to vilify the gay community. It’s a no-win situation.

It’s all balanced out with moments of tenderness between Ostertag and Rapp and their love story is endearing. It may be problematic in a few areas, including the fear of the authorities, but it is still a loving relationship that continues to develop.

The Circle is a personal tale of the people of the time, presenting an honest depiction of the attitudes of a gay-rights battle.