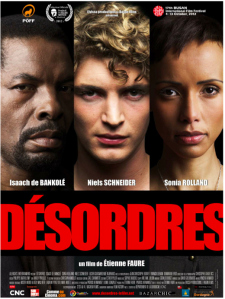 Chaos is a film written and directed by the French filmmaker Etienne Faure and was released in 2013. The synopsis of Chaos sounded mundane to me at first but I quickly changed my mind about the film. It’s totally worth a watch!

It tells the story of Vincent, a teacher, and his family. His domestic life is intruded upon by a student, Thibault, whose kind and friendly personality changes over the course of the film until he becomes a ruthlessly calculating enemy of Vincent with only one goal: his wife.

The film shows the downfall of the relationship between Vincent and his wife and as the film goes on the disaster escalates. It is reminiscent of a slapstick film where one joke follows another except that this film it is charting a journey into a spiritual abyss.

The pace is chosen very carefully and it is never boring to watch. But what elevates Chaos above its competitors is this:  at the end of the film the audience can understand why all characters behave in their way and I bet you will feel sympathy for some of them, especially Thibault. I know I did.

The camera often tells more to the audience than the actor can actually show. Suspense and thrill are present throughout, which may drive some viewers slightly to madness. This is all supported by good acting.

I suggest watching the film alone and not with your girlfriend or wife, especially not if your relationship has troubles.  Because then it will might end in chaos.