Few genres of cinema are as diverse or as important as the documentary, but 5 Broken Cameras stands out even among its peers as an impassioned, first-person account of a deeply unhappy situation.

The titular cameras belong to Emad Burnat, a Palestinian olive farmer living in the West Bank village of Bil’in. He buys his first camera around the same time that Isreali authorities begin building a barrier intended to separate settlers in the area from Palestinian locals, carving out a sizeable chunk of Bil’in’s land in the process.

Along with his friends and family, Emad sets about opposing the construction of the barrier through peaceful means while filming everything, from his family life to the villagers’ frequent standoffs with the Isreali army. The entire documentary is shot from this unique, hands-on perspective and it makes 5 Broken Cameras a terrifyingly immersive experience. 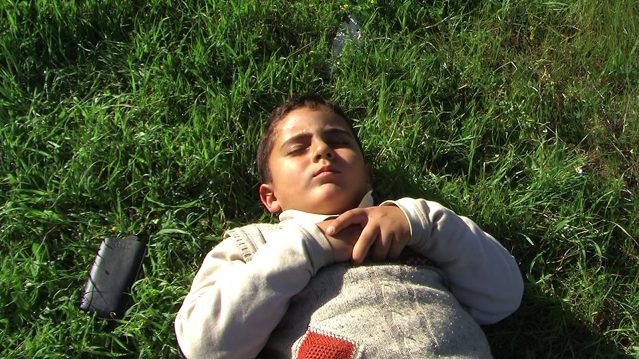 No amount of news footage can recreate the experience of being in the middle of such a terrible conflict, and nor truly can any film, but Emad’s footage comes damn close, especially when we are given his viewpoint for the protests. He loops around soldiers and demonstrators in the turmoil, often at huge personal risk, and the results speak for themselves. When stun grenades go off metres from the camera, you will find yourself flinching.

And there are a lot of stun grenades here. And tear gas. And rubber bullets fired from assault rifles at unarmed civilians. The threat of Israel’s army is omnipresent but Emad’s gaze is unflinching, and the picture he gives us can only be described as one of occupation. The film is at its most provocative when the camera gets close to the Israeli soldiers. For the most part they respond with trained detachment but occasional flashes of emotion are unmistakable. Sometimes it is anger, sometimes it is sympathy.

Filmed over a number of years, 5 Broken Cameras is a deeply personal tale. Initially Emad’s cameras are only there to document the proceedings but as the film progresses they become a lifeline for him, granting him some detachment from the chaos of his surroundings and on one occasion possibly saving his life by stopping a bullet. Our narrator starts out as an amateur filmmaker but finishes the film as an embedded reporter in his own life, and at great personal cost.

Threaded throughout are scenes of Gibreel, Emad’s youngest son, who grows up in tandem with the construction of the wall and is responsible for some of the film’s heaviest emotional punches. We see him, little more than an infant, marching in demonstrations and risking his life alongside other children his own age. As he gets older, his thoughts turn to violence against the people that he has seen the worse of. It’s chilling stuff and a fearsome reminder of who the greatest victim in any conflict is.

The Isreali-Palestinian conflict is one of the ugliest and most complex issues facing us today and the outlook you bring into 5 Broken Cameras will likely inform your opinion on it. What can’t be denied is that as a piece of filmmaking, as an exercise in forced perspective, it is a triumph. It is the kind of candid, unflinching documentary that makes you wonder why we bother with something as paltry as fiction. It takes up residence in your subconscious and prods at you every time you find yourself worrying about your insignificant problems.

5 Broken Cameras won awards at Sundance, the International Emmys and the Yerevan International Film Festival. It was nominated for Best Documentary at the 85th Academy Awards. It’s just a shame it has to exist in the first place.