FILM REVIEW: HOW TO USE GUYS WITH SECRET TIPS (2013, SOUTH KOREA)

Lee Won-suk’s first feature film is a roller coaster of tongue-in-cheek rom-com clichés, slapstick comedy and cringey situations, and it does all this at the same time as addressing the art of filmmaking.

Choi Bona (Lee Si-yeong) is first introduced to us out of the pages of a “Where’s Wlado?” book as a tomboy who, despite her tireless efforts at work, fails to achieve her dream to be a director, not just a second AD to a ridiculous commercial director who rose to fame with an avant-garde sanitary towel ad. She is seemingly invisible as other girls literally outshine her. A solution to all her problems comes to her in the form of an old-school videotape from where the film gets its title.

Dr Swarlski, the charismatic love guru in the video, appears to her whenever needed to avert disaster, whether it be in her professional or personal life. His techniques on how to get what you want from men prove very effective, to Choi’s great surprise, and she even ends up attracting the eye of superstar Lee Seung-jae (Oh Jeong-se).

We see a rapid transformation from a hunched girl cocooned in a hoody to a beautiful butterfly who struts her stuff, turning heads on the street. Whilst the “˜annoying’ second AD, that Lee used to mock, is going up in the world, Korea’s “˜rising star’ is on a downward spiral, staring in embarrassing ads with his arch nemesis Oh Ji-hoon (Jun Sung Kim) and making a fool out of himself trying to win Choi over. 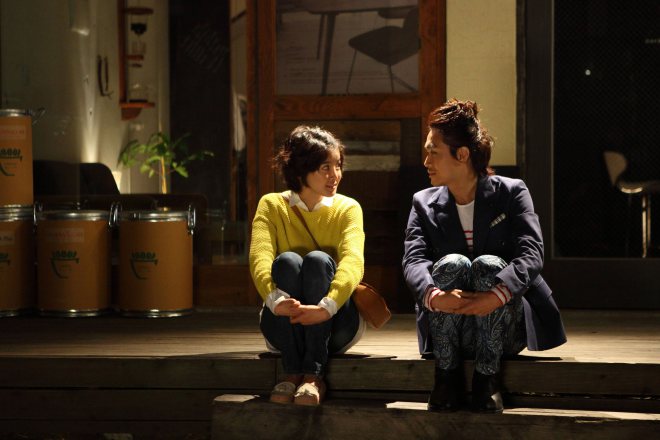 Men are treated as animals who can be read like a book, incapable of controlling themselves and often suffering from “blue balls”. Really, they can’t help themselves –as Lee himself admits in the lift with Choi. Whilst Choi is using men, we cannot judge her, as she is only forced to do so by the nature of the society she’s living in. This is the serious undertone to the film, but don’t worry –it’s taken in a very playful way.

One of the film’s greatest achievements is its self-awareness of being a creation, of being a film, of being manipulated. There are moments when the action pauses, rewinds, goes into slow motion, or is interrupted by extracts of the manual video that interacts with reality. Dr Swalski addresses the camera –which isn’t only being watched by Choi, but which is also being watched by us.

Si-yeong is brilliant in the lead, perfecting the doe-eyed and pouting “˜innocent’ girl look that the video advocates, and baring her teeth in the fakest of fake smiles, imitating the awkward white couple in the video manual. Jeong-se equally masters the arrogance and eccentricity of an attractive young man caught in the limelight. Together in their performances they poke light fun of how some people live their lives, acting even though the cameras aren’t rolling.

This metafictional film is a fun and original take on the otherwise trope journey of a plain Jane who gets turned into a “princess”, and it is guaranteed to make you smile.