Fish Story, a hard-rocking sugar rush of a comedy from Yoshihiro Nakamura, is a film that takes pleasure in keeping its viewers in the dark. The film technically falls into the ‘hyperlink’ category of cinema, though Fish Story goes against the trend of frequent montaging and cross cutting typically found in films of this category like Magnolia and Crash, instead moving through each of its mini-stories one at a time. But rather than providing the audience with easily graspable narrative links between its vignettes, Fish Story connects its scenes in vague, cryptic ways. One generation’s story becomes another generation’s mythology, prophecies morph over time into personal mission statements, small blunders and misinterpretations eventually become critical changers of fate. It’s the butterfly effect in action and a decades-spanning game of Chinese whispers shown with its scenes reorganised like blocks in a Jenga tower. It would be a perfectly touching bittersweet drama if it wasn’t so busy showing us a good time. 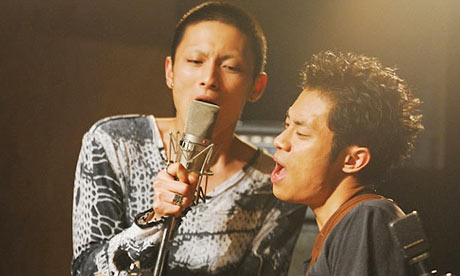 The two sturdy pieces on which the film’s narrative is built are its chronologically first and last scenarios. In the then-not-too-distant future of 2012, a comet is heading towards Earth that seems to bring the promise of the end of days. One record store remains open regardless, where a strange and cynical man smugly assures two music nerds that their time is up but the store’s proprietor has hope that the world will somehow be saved by a mysterious 1975 recording from an obscure, ahead-of-their-time punk band. The song is called Fish Story, the band is called Gekirin and the story of the band and the song forms the opposite bookend to the chronology. While a lot happens in between these two points in time (much of it involving doomsday cults), it’s in the story of Fish Story (the song) that most of the themes of Fish Story (the film) are most clearly established, including the passage of time, the unexpected turns and disappointments of life and the struggle to uphold one’s private convictions without giving in to cowardice or cynicism.

Despite its ostensibly disjointed narrative, the film maintains a feeling of cohesion thanks in part to its consistently warm tone. For an unconventionally ordered film about punk rock and the apocalypse, Nakamura’s directing may often play it a little too safe but it has the heart to do Isaka and Hayashi’s lively, quirkily humorous script justice. The film evokes genuine empathy for a host of characters that could so easily have got lost in the shuffle. In fact, it’s the film’s humanity that allows this shuffle to rise above the level of mere gimmickry. The structure reminds us of how any story can be told in a variety of ways and the story reminds us of why stories are worth telling in the first place. In the closing minutes of the film, when the jumbled pieces of Fish Story are at last assembled into a straight line, there’s an undeniable thrill not just in finally seeing these parts merge into a comprehensible whole like a magician’s final revelation but also in seeing the tribute to personal integrity that it forms.