Upi Avianto’s psychological thriller-cum-horror is a thickly layered web of intrigue that may entail one or two surprises long the way.

A dull and dreary Indonesian town is gripped by fear as rumours spread of a serial killer on the loose. Loner Elang (Abimana Aryasatya) suffers more than the rest. He is haunted by terrible visions of murders committed by a man in a rabbit costume. The people he sees in his dreams enter into his life and he is left a pathetic trembling wreck, and is consequently suspected by his neighbours. His strange behaviour, especially towards the mother and daughter who live next door, isolate him even more.

His isolation is amplified in the scenes at the “˜Killer Rabbit’ and dance shows when the camera focuses on the manic laughter of the audience around him. Elang appears trapped in a nightmare, constantly shaking his head in disbelief at the situation he finds himself in.

Yet his behaviour dramatically changes when he is entrusted with a task by a femme fatale who is familiar to him from his dreams. It is from this moment on that the film really takes shape. The complicated plot unsettles our perceptions of what reality is. Like the increasingly confused inspectors, we are desperate to discover the truth. 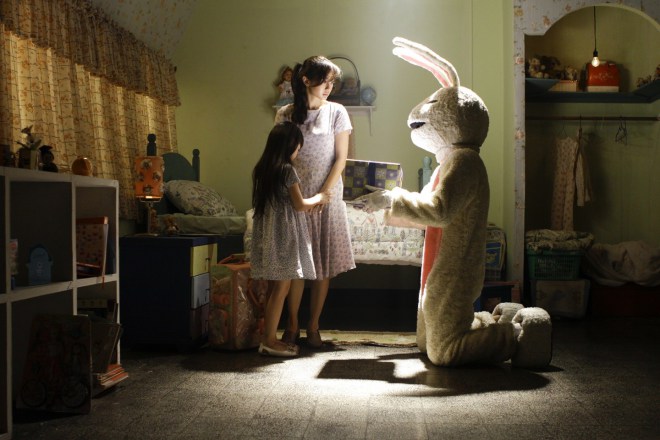 It must be said that the murder scenes are not for the faint-hearted. Blood is used unsparingly and the sound of butchering at times seems unnecessarily loud. Typical tropes such as “I smell blood”, enunciated by an exaggerated mad woman, take away from the genuine fear that Avianto otherwise manages to create.

The setting of a suffocating grey apartment block and a depressing café add to the atmosphere of entrapment and allow for Elang to project his colourful dreams. There are no distractions for us as viewers –we can focus on the psychological elements in the film.

Aryasatya is a strong lead and his posture and facial expressions paint the anxiety of a man on the edge. His tireless physical manifestations of his internal woes in the first half are uneasy to watch. He embodies the epitome of a victim, which contrasts well with the sexy and self-assured character of Jingga (Imelda Therinne).

You can be forgiven for initially thinking that Shackled brings nothing new to the horror genre –there are clear similarities to David Lynch’s techniques regarding dream worlds, and to Donnie Darko with the rabbit idea, but we later discover that it is much more than a collection of horror clichés and succeeds in keeping us attentive until the very end.