Happy in her own perfect world of petticoats and parasols, Momoko doesn’t feel the need of human interaction. Disinterested in her parents’ divorce and in making friends, she is a loner. Only fashion is capable of getting any emotion out of this stocking-clad seventeen year old. That is until she strikes up an unlikely friendship with Ishiko, who was also a loner in her school days, but unhappily so. She was taken under the wings of a biker girl gang, The Ponytails, but despite her circle of friends, seems to like spending time with this new intriguing character whose tough personality doesn’t go with her fragile look. “Humans are born alone, live alone and die alone”, says Momoko, nonchalantly.

Despite her baby bonnets, from a young age, Momoko has shown maturity above her years, telling her mother not to worry about going off with another man because life is short and only being happy is important. It is in part Momoko’s unorthodox philosophy on life and her independence that draw Ichiko to her. Well, after all, they do say opposites attract.

This odd partnership sets the stage for adventure as the two girls help each other in the ways each knows best. The strangeness of the situations is complemented by the playful nature of the film in its manipulation of time, reality and fiction. At one point the classical music in the soundtrack turns into Momoko’s ring tone, and at another, Momoko’s life story is recounted to us on the news she’s watching on TV. Complete with flashbacks, slow-motions and even snippets of anime, Kamikaze Girls will not allow you to ever get bored. 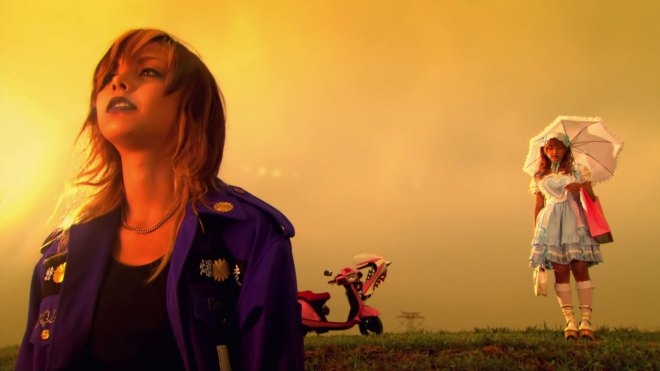 We are invited into the protagonist’s world through a voice-over of her thoughts, often humorous, on the “˜dirty’ and unrefined people around her -victims to tracksuits and the supermarket chain Jusco. We also see her thoughts visually, such as when her younger self appears to her on the street and when passers-by “˜talk’ to her, voicing her subconscious.

The film is dominated by females, strong and alternative young women, which is refreshing to see. The leading ladies, Kyoko Fukada (Momoko) and Anna Tsuchiya (Ichiko) are a joy to watch, especially when together on screen, and their brilliant performances have been acknowledged: Fukada was awarded Best Actress at the Yokohama Film Festival and Tsuchiya collected awards at various film festivals, including the Blue Ribbon Award for Best New Actress

Kamikaze Girls is quirky and original twist on the age-old tale of friendship. “It’s not wrong to feel good”, asserts idealist, Momoko, the living doll, and feeling good is exactly how this truly Japanese gem will leave us.