Nakashima’s Memories of Matsuko grips you from the start, and doesn’t let up. A film that juxtaposes moments of sorrow with moments of euphoria, it’s a wonderfully weird glimpse into a troubled but vivacious life.

The film opens with Shí´ (the endearing Eita) finding out that an aunt he never knew he had, Matsuko (Miki Nakatani), has been murdered. He starts cleaning Matsuko’s apartment, and trying to piece together who may have killed her. The subsequent story is all about our heroine Matsuko, as we see her life unravel through a series of flashbacks. Initially, Shí´ is told that her life was meaningless. The film’s scenes collate to disprove this. 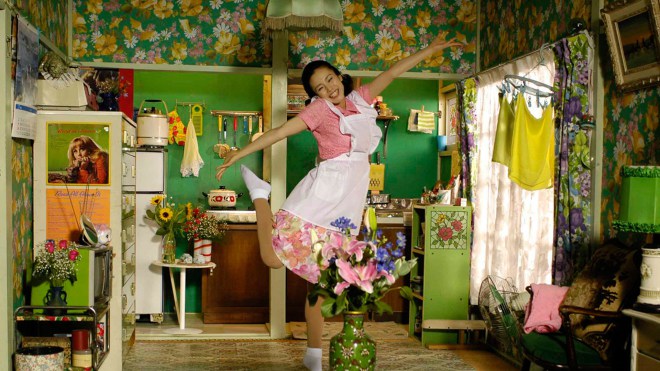 Matsuko’s life depicts a series of difficult relationships with men. First, she craves attention from her father, whose only concern is with Matsuko’s sick sister. She develops a defence mechanism, a silly face she pulls to calm her down in tense situations. She maintains this ability to be silly and childish throughout the film, where having been disowned by her family, Matsuko’s life descends through a series of abusive relationships and unfortunate circumstances. Matsuko’s optimism gives her the vitality necessary to overcome the many hardships she faces. Though this passion keeps her going, it is also essentially what gets her into so much trouble. She calmly delivers the line: “hit me or kill me, it’s better than being alone”, and we can see that her willingness to live and experience is what is rooting her in this mess.

Hugely rich and energizing, it channels Luhrmann and Tarantino, as well as Von Trier’s “Dancer in the Dark” in the way it masterfully uses random and jarring music to further emote. It reflects the narrative in its form, with a feeling that the film itself is whirling out of control, just like the life it’s depicting. In order to capture this madness, Miki Nakatani is perfect in balancing charm and strength, and her small quirks make Matsuko’s bizarre actions believable. At one point, Matsuko’s lover describes the sole reason he chose her: “I couldn’t resist, you’ve a great body!” This comically banal statement doesn’t sadden her, but rather spurs her to begin working in brothel houses and for pimps. Thus the film moves seamlessly between comedy and tragedy, with outlandish and unforgettable style.

Discover Memories of Matsuko on FilmDoo today (UK & Ireland only)