Gakuryu Ichii’s film adaptation of Shirí´ Maeda’s avant-gard play maintains the feel of the théí¢tre de l’absurde. It may be a strange watch, with its loose structure and the seemingly out-of-place dialogue, but if we remind ourselves to be open-minded, there’s no reason why we can’t enjoy this original piece of work.

Jinsai Medical University campus is shrouded in mystery due to various urban myths. A group of students in the urban myth club discuss the possible truths about what lies in the third basement room. Could it be true that it’s home to American biological warfare?

We are left with this in mind when one by one, the students start having coughing fits, which they initially dismiss as nothing but a tickle in the throat, but which end up being fatal in the space of a few minutes. Is this a virus epidemic or is something more sinister going on?

The reactions to the deaths start off like you’d expect: disbelief, crying and fear but they become increasingly inappropriate. The child-like and idiotic Katsufmi (Asato Iidais) is more interested in ensuring his green tea drink comes with ice-cream than coming up with a solution to the predicament he’s got himself into –he’s getting married but another girl is having his baby. This father-to-be isn’t the only one with surprising priorities. We later hear other exchanges that would raise an eyebrow or two: “Make it quick. I’m in a hurry!”, is the reply to a young pop star afraid to die on his own. “If you need to… you can die, I wouldn’t mind” –such considerate words. From being something to be avoided at all costs, death quickly becomes something none of them want to be left out of. After all, what can be worse than being the only one left on the planet? 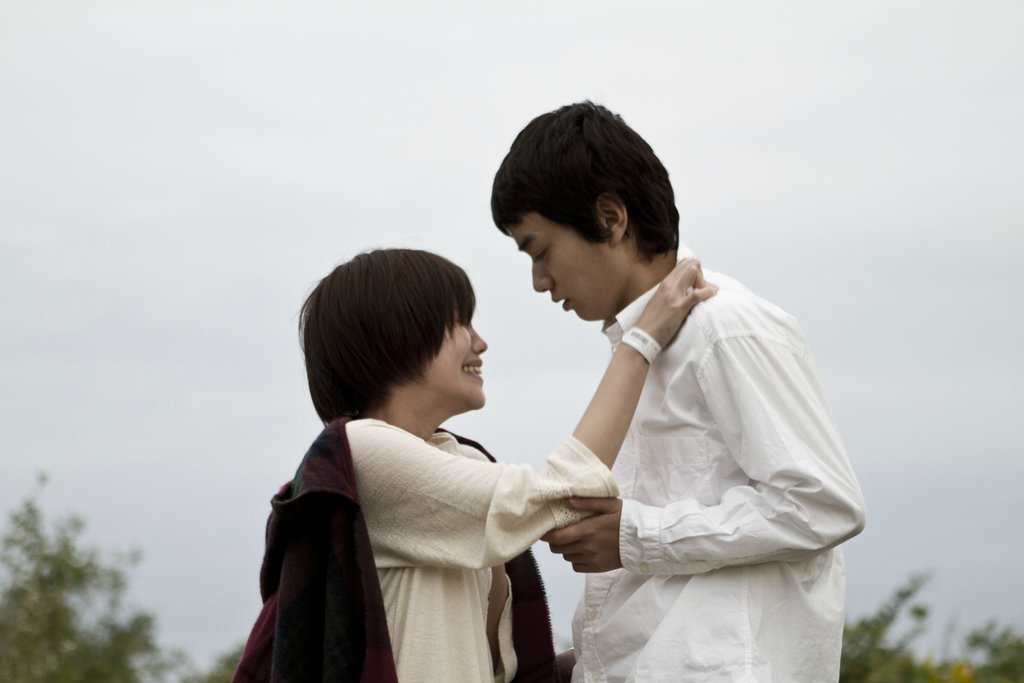 As the dialogue gets stranger, so do the characters we meet. Dr. Fish, a man in a conundrum over his ethically-questionable friendship with the gilled creatures he likes to eat so much, and his friend Yama-san (Jun Murakami) shuffle around the campus arm-in-arm like two old grannies, and we’re never quite sure whether their relationship is more than just friendship. The film flits between eighteen characters, changing its focus as they die out. Whilst we are never really given the chance to get to know any of the characters in depth, we are given a solid overview of group interactions and character types: a protective mother, a devoted fiancée, a best friend, a middle-aged man besotted with his younger colleague. The way they treat each other depends greatly on the relationship they have.
Dialogue and comments on human nature, critical or not, dominate the thrust of the film, whilst action and plot are secondary. The situations that are initially established in the film turn out to be irrelevant and insignificant, but maybe that’s precisely the key to why they are included. Why should everything be so rational? The situations may become predictable as the deaths repeat themselves, but the characters continue to shock us till the very end.

The fact that everyone is dying becomes secondary to the oddness of the dialogue and reactions of the characters in this jumbled up world. We may not be used to this kind of film with a thin plot and ordinary settings, but it has its own charm which resides in its absurdity. After all, it is a comedy, not of the laugh-out-loud type, but of the kind that should at least bring a wry smile to your face.

Watch Isn’t Anyone Alive? on FilmDoo.com (UK & Ireland only)

This entry was posted in ASIA, Reviews and tagged cinema, film, Japan, review. Bookmark the permalink.