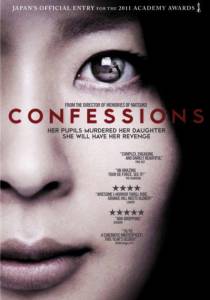 Confessions, a film adaptation of an acclaimed Japanese novel by Kanae Minato and Japan’s Oscar-entry film of 2011, became an instant Asian movie classic upon its release in 2010. The film begins with Junior high school teacher Yuko Moriguchi announcing to her class her resignation, and that two of the students in her class were responsible for murdering her four-year-old daughter. From then onwards, things are not pretty.

With the bluish color scheme and use of slow motion, we’re given a very unsettling atmosphere. The teacher narrates the first twenty minutes of the story, and as she does, the story slowly builds itself, the tension grows, and the film becomes even more unsettling from then onwards.

Other characters are given the chance to give their own side of this story. Because of this, we get a complex narrative and a new insight and revelation to some of these characters. Each time it becomes difficult to know whom to sympathize with. Morality becomes ambiguous in this film, especially with the whole debate brought up by the teacher. In Japan, minors are protected by the Juvenile Law, so the underage students who murdered her daughter can’t be prosecuted.

This film deals with themes such as family, insanity, the struggles of growing up, and life and death. It
seems to show the worst sides of humanity more than it does the best, and anything good is used just as a means to hide from the horrible truths of their lives. Strangely enough, when it comes to media coverage, people seem more interested in news about murder or tragedy than they do on a human accomplishment. It’s not that there’s no good in life. It’s people’s attitudes that make them not recognize the best of themselves, whether it’s cynicism, ignorance, etc.

The only character that believes in good is the overly optimistic new teacher, but that still doesn’t help the students with their issues. In Confessions, believing in good just seems to make things worse. The students are told to value their lives, and yet they constantly think of death and the worst reasons to live.

With great cinematography and editing, Confessions becomes a haunting film which immediately attracts the viewer, and keeps them watching until the end.