FILM REVIEW: THE FOREIGN DUCK, THE NATIVE DUCK AND GOD IN A COIN LOCKER (2007, JAPAN) 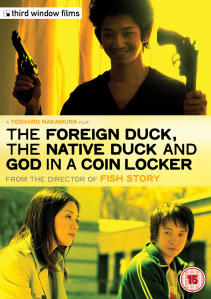 The Foreign Duck, The Native Duck and God in a Coin Locker is a Japanese Drama with elements of a detective story told in that particular Japanese unconventional style audiences know and love. Shiina (Gaku Hamada), a mild-mannered, friendly young man has just moved to Sendai for university. Being new to a city can be pretty daunting, but he makes a friend quickly, his neighbour, Kawasaki (Eita).

After Kawasaki catches him singing Blowin’ In The Wind, he invites Shiina in to his home, and shortly after on an armed robbery of an all-night book shop – as one does. Thus starts Shiina’s weird, exuberant journey into Kawasaki’s world.

While I was watching The Foreign Duck, The Native Duck and God in a Coin Locker I was texted by a friend, who asked what the film is about. At that stage I was 75% of the way through and still I wasn’t quite sure how to answer. It’s an odd film – endearingly odd, in a way only a Japanese film can be.

Book theft, animal mutilators, a love story, comedy and tragedy, as well as commentary on Japanese attitudes to foreign students – there’s a lot going on. The film drops you into the action straight away, and the plot twists and turns keep you engaged. Time and perspective are both fluid in this film, but Shiina’s presence brings coherency.

I could watch anything with Eita – I’ve been a fan since I saw him in Azumi back in 2003, and he puts in a nice performance as the cool cat Kawasaki. Another notable performance comes from Nene Ohtsuka who plays the pet shop owner, Reiko, who would also be at home in a 1940’s film noir. The Foreign Duck, The Native Duck and God in a Coin Locker is an enjoyable, heart-warming, offbeat jaunt that will keep the audience guessing till the very end.

Watch The Foreign Duck, The Native Duck and God in a Coin Locker at FilmDoo.com (UK & Ireland only)