INTERVIEW: TARQUIN NETHERWAY ON THE RIVER

Tarquin Netherway’s The River creates a collage of youth that combines moments of mundane, suburban existence with quirky, highly energised scenes which are expressed through both human behaviour and the charming natural environment in which this fragmented narrative takes place. The particular focus on organic imagery and sound, interspersed with contrasts in pace, presence of dialogue and movement, creates a somewhat dreamlike transience in the film as there is no strict narrative, which brings to the forefront of our attention the notion of spontaneity and nostalgia in youth, that resonates in us as we watch The River. This sensation is only heightened as we delve into the mind of the creator of this elegant, captivating short.

The inspiration for making this film came from meetings with remarkable trees and rivers that I stumbled upon in my brief existence, and also a collection of memories and photographs from my childhood.

Did you face any struggles in the process of making The River?

Yes, financial struggles were the most difficult to overcome, but I had great support from many people. It is very difficult to convince people to support something that is very personal and perhaps a little self indulgent.

In terms of scene locations, what made you decide on where to film?

The film was shot in the neighbourhood where I grew up; these locations were what inspired the film. As in I found the locations before I wrote the film.

What sort of themes did you want to capture in making The River?

What were your intentions regarding the appearance of the alien?

The extra-terrestrial biological entity represents the key underlying theme of the film: “˜aliennness’. If you look up synonyms for the word alien you get terms like external, non-native, foreign, unfamiliar, visitor, outsider, stranger. In film and storytelling the audience doesn’t want things to be out of place, but they are the aliens to this story. Also I just want to believe.

Why did you choose to end the film with the final sequence of the leading actor repeating the same physical movement?

Because I saw this as a fitting end to a sometimes-chaotic experience, water acts in a repetitive physical movement until it smooths out the surface of the earth and begins to meander.

The highlight of the creative process is definitely coming towards the end of the editing process when everything is coming together and you can really fine tune small details. My favourite moment in the film would have to be the final sequence, I find it quite hypnotic.

Is The River, or your approach to filmmaking in general, influenced stylistically by any other films or directors?

I was definitely influenced by films with strong visuals and obscure narratives such as Gummo by Harmony Korine, The Holy Mountain by Alejandro Jodorowsky, Hukkle by Gyí¶rgy Pálfi, and Bad Boy Bubby by Rolf de Heer.

Are you currently working on any projects, or have any planned for the near future?

I’m hoping to get another short film made shortly. It follows a young arsonist/volunteer fire-fighter who starts a wildfire only to help put it out so that they can be seen as a hero in their small town.

Watch The River free on FilmDoo.com. 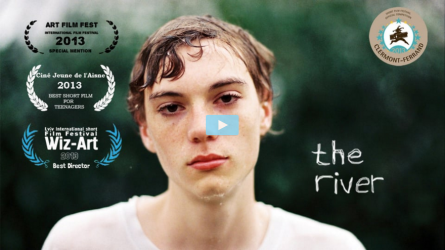 This entry was posted in Features, Interviews, SHORT FILMS and tagged Australian films, Tarquin Netherway, The River. Bookmark the permalink.