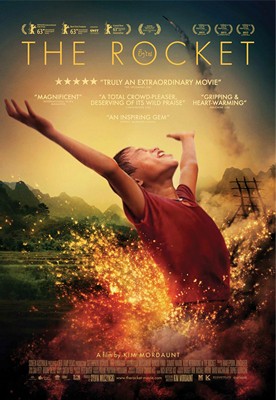 Beginning with a caliginous and deep undertone, “The Rocket” soon introduces the harsh repercussions of globalisation on small communities within Laos and their unforgettable past of war and struggle.

As the film unravels, an uplifting and joyful atmosphere emerges, which offers a humorous energy and light to the story. Kim Mordaunt achieves this fascinating dynamic without losing integrity and sensitivity towards the confronting subjects and difficult issues highlighted within the film.

A young boy, Ahlo (Sitthiphon Disamoe), is believed to be bad luck within his town. When individuals suspect him responsible following a series of unfortunate incidents, he realises that he must prove them wrong if he ever wants to gain their approval. As the townsfolk are forced out of their homes, Ahlo and his family are left to determine their own future and find themselves on a journey of distressing uncertainty.

When Ahlo befriends the two outcasts of the town, a brave witty young girl (Kia) and her preposterously kooky uncle (Purple) the trip turns into an amusing adventure filled with light-hearted misfortunes and setbacks. In a final attempt to prove he is not cursed, Ahlo sets out to construct an impressive rocket for the locally famous rocket competition, in hope that he can earn back respect and acclaim for his family.

“The Rocket” is injected with a harmonious and uplifting energy with the beautifully idyllic backdrop of Laos and brilliant performances from young actors, Sitthiphon Disamoe (Ahlo) and Loungnam Kaosainam (Kia) along with Suthep Po-ngam (Purple). This optimism and gentleness creates a feel good atmosphere allowing the film to obtain entertainment qualities yet still remain an informative, and honest reflection of Laotian history.

This entry was posted in OCEANIA, Reviews and tagged Drama, Film review, kim mordaunt, the rocket. Bookmark the permalink.