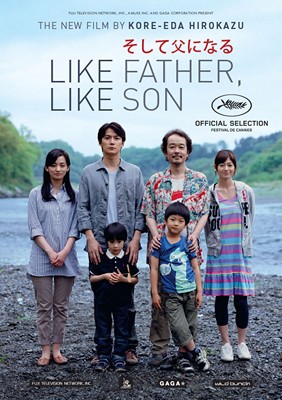 Imagine you discover that you have been switched at birth and that your parents are not your real ones. Would you look more like your biological father or the one that raised you?

In Like Father, Like Son, as in his previous great movies Nobody Knows(2004) and I Wish (2011), Koreeda is exploring the theme of the family. It is one of the major themes of Japanese cinema, and Koreeda once again asserts himself as Ozu’s heir.

Ryota Nomomiya (Masaharu Fukushima) is a busy and ambitious architect who neglects his wife Midori (Machiko Ono). They live in a designer apartment in Tokyo with their shy and polite six years-old son Keita. Ryota hardly sees his son because of work, and applies a very strict education on him. The family then learn that their son is not their real son and that he has been switched at birth with the son of Mr and Mrs Saiki (Yoko Maki and Riri Furanki). Their son Ryussei, on the contrary, is a provocative and active child living with his brother and sister and their not-so-working father is a “bon-vivant” whom they admire. The family decide to exchange their boys for 6 months in order to get to know each other.

Koreeda said his movie was inspired by 1960s baby swap cases in Japan and by his own experience. It questions the legacy of fatherhood that is, according to the movie, mostly cultural and not that much natural. But above all, the director is a master at filming children. It is as if he placed the camera somewhere and let the kids guide the scene.

The movie was a great success in 2013 at Cannes and, if not the best work of Koreeda, it is a warm-hearted, tender and humorous observation of two opposite families.