Who’s Afraid of Vagina Wolf? is an intelligent rom-com in the strain of Manhattan or Annie Hall, exploring the complicated relationships we humans enjoy getting ourselves into. Anna (played by Anna Margarita Albelo), an artist and film maker living in her friends garage, has just turned 40. Anna’s list of birthday resolutions is short, but aside from the date, the resolutions remain the same as the year before: 1. Make a film. 2. Get a girlfriend. 3. Lose twenty pounds. After meeting beautiful modern beatnik Katia Amour (Janina Gavankar), Anna forms a plan to kill two birds with one stone – film a lesbian reimagining of the classic film Who’s Afraid of Virginia Wolf? casting Katia as the lead! Sometimes the simple plans are the best… 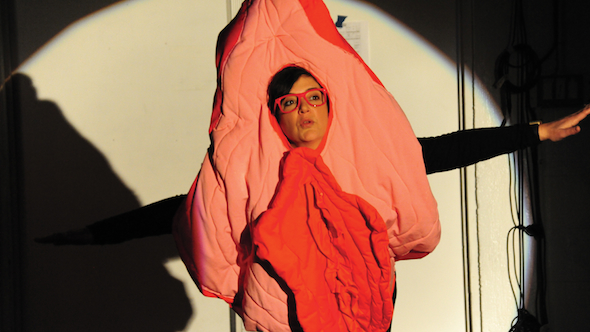 Semi-autobiographical, Who’s Afraid of Vagina Wolf? is director Anna Margarita Albelo’s first feature, and has been a hit with audiences and critics alike, picking up awards at the Molodist Festival in Ukraine, L.A. OutFest, Bologna and many more. Pleasantly derivative and referential, the self-deprecating humour makes for some pretty endearing characters, with witty dialogue that satirises the bohemian lifestyle and cinema itself.

There are some stellar performances here, touching without being corny, managing to avoid classic tropes of both rom-coms and LGBT cinema. Who’s Afraid of Vagina Wolf? is a charming and witty comedy that I would recommend to anyone looking for something light and amusing, without killing any brain cells.