Himizu, a powerful, often strangely funny drama from Sion Sono, could have easily been a work of pure misery. The film spends much of its time throwing hardship after hardship at its two leads, painting the world they grow up in as one of unfeeling criminals, sadistic weirdoes and good people living in unaddressed poverty. But while the film is more than a shade grittier than Sono’s 4-hour, gleefully excessive Love Exposure, Himizu still makes enough eccentric stylistic manoeuvres to retain a certain distance from its suffering. In doing so, Sono allows the emphasis to move from the suffering itself to the ways in which this suffering can mould a young mind’s attitude to the world and to themselves. Instead of serving as a cheerless cinematic endurance test, it manages to be a film about hope by making hopelessness itself the primary threat to its characters.

Set shortly after the devastating earthquake and tsunami of March 2011, the wreckage has mostly been cleaned up but the disaster still casts a disheartening shadow over the areas that it struck. We never see what sort of boy the teenage Yuichi Sumida was before the event but he lives in its aftermath as a hostile, cynical individual with suicidal fantasies. Living in a boat-rental shop alone after his mother leaves him, he gets the occasional visit from his alcoholic father, who shows up at Sumida’s house drunk, asking for money and encouraging his son to kill himself. 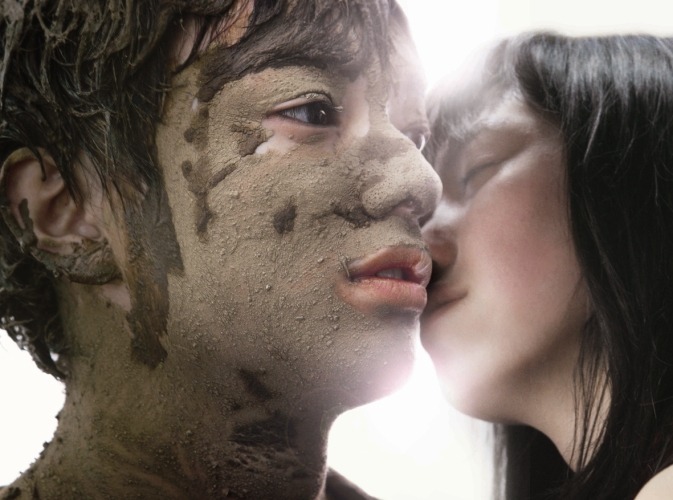 After a harrowing but not unheralded mid-film incident leaves Sumida feeling like he has even less to lose, he casts himself as an outsider vigilante determined to “kill idiots who trouble citizens”. For a country with an exceptionally low murder rate, Japan has had an unusually high number of random knife attacks in the last decade. Himizu goes as far as to make such events almost seem commonplace and, while Sumida makes it his mission to stop these killings, he clearly has a lot in common with their misanthropic perpetrators. The conviction with which he tries to stick his own knife into a young assailant on the bus betrays just how close he is to turning his weapon on the general public.

Meanwhile clawing her way into this morose soul’s life is his classmate Keiko Shazawa. A cheerful, obsessive misfit, Shazawa hopes to lead a simple life with her crush, Sumida, helping him to run his currently flagging boat-rental business. In the first quarter of the film, Shazawa may look to be playing the part of the bubbly love interest who swoops in to pull Sumida out of his despondent rut like in so many indie dramas, though I don’t recall a scene in Garden State where Zach Braff aggressively and repeatedly slaps Natalie Portman. But while that isn’t a completely off base description the role Shazawa plays for Sumida, the film is fully aware that things aren’t always that simple. For one thing, we soon learn that Shazawa has a troubled, if grimly absurd, home life of her own. She wants to be a comforting light in Sumida’s life but she has enough trouble staying positive herself and the more she learns about Sumida, the harder this gets. In trying to pull him up, she may end up getting pulled down.

Fumi Nikaido is a delight to watch as the endlessly patient Shazawa, often humorous in her exuberance but heartrending in the moments where the trials of life and Sumida’s woeful outlook put a strain on her optimism. Shota Sometani is similarly captivating as Sumida, usually only breaking from his quiet but contagious state of gloom for the sake of an alienating outburst of violent, desperate frustration. Together they provide a compelling, peculiar and emotionally conflicted reminder of the burdens heaped on the next generation of adults.