Michael Tyburski’s Actor Seeks Role follows an aspiring method actor (played by Alex Karpovsky) who earns his wages performing in various roles as a medical patient for training medical students. He soon reveals the consequences of preparing for a role that develops into an unhealthy obsession, one that we, as viewers, seem to be more omniscient to than those who we meet in the film, credited to Tyburski’s clever choices of camera positioning and attention to detail. The director successfully yet subtly creates humour through the personas of his characters, played by Karpovsky and Dylan Baker, creating a chilling contrast in the uneasy ending of the film. Tyburski grasps the limited time allowance of a short film and generates this into the opportunity to tell a short yet gripping story based on a topic that often seems overlooked or simply does not gain coverage.

Tyburski responds to our curiosity for what caused him to pursue this unique project, and shares his experience of creating the film.

Part of the inspiration came from my interest in sub-cultures, and medical acting is this whole fascinating community that is really only known to actors and the people who work in medicine. I really liked the idea of a story set in that world. When I started researching standardised patient programs, I discovered all these interesting parallels between medical acting and stage acting. For instance, all the real-life medical acting facilities have things like dressing rooms, prop closets, “observation theatres,” etc. and I liked the idea of playing with those elements in the film. Since it’s a story about performing, I wanted to show how absorbed a dedicated actor could get by all this.

Did you face any struggles in the process of making Actor Seeks Role?

One of the biggest challenges was finding a working hospital that would let us film a movie there. We looked at several real-life standardized patient (aka “medical acting”) facilities around the city who were open to the idea, but hospitals and the like are notorious for being very pricey locations to rent, and we certainly couldn’t afford what they were asking for on our shoestring short film budget.

Fortunately we were able to convince an actual standardized patient facility (that just so happens to be within one of the biggest hospital systems in Manhattan) to lend us their entire floor on a weekend when classes weren’t being taught. Since the film’s subject matter romanced the very thing that they do at the facility we were filming in, I think the people who run it were charmed by the idea of us telling a story about their world. We still had to get the blessing of the larger hospital system and cut through some red tape, but somehow we managed. A few days before we started production, a slight hiccup arose when there was talk of a healthcare workers strike planned at the hospital. Luckily it was all settled at the eleventh hour and our shoot went smoothly.

To what extent was this film planned in detail? Were there any points of improvisation?

When you’re making a movie, you always have so much to accomplish in very little time, and I like to be as prepared as possible. So I’m pretty meticulous about planning my films. For this one, I mapped out all the details of the world we were building, down to what photos and vintage Playbills should be on Paul’s desk. Before we started shooting, I made an animatic of the entire movie with still photos and temp music to help me understand what the edit might look like, and also help me to balance the tone and transitions in advance. All this said, I do still like to leave room for some improvisation on the day though. I’ve learned that although it’s extremely important to have everything planned out in great detail, you can still sometimes come up with a better way to shoot something in the moment. The script was also very tight before we began shooting, but I learned early on in rehearsals that Alex and Dylan both happen to be very talented improvisers. So I made sure to leave room for that in their scenes too. Honestly, some of the best moments between them in the film were just spontaneous on the day.

What made you decide to cast Alex Karpovsky as your leading role Paul, and Dylan Baker as the medical instructor?

I’d been a fan of Alex’s work for a while and had wanted to work with him on something. He’s a very skilled performer and I think he has an element to his persona that reminds me of a young Woody Allen too. When we finished the script, Alex read it and fortunately wanted to come on board right away. And Dylan Baker, isn’t he great? I have of course been an admirer of his work for years. I never thought we’d be able to get him for this, but our casting director was able to get him the script and he loved it. He really took to the doctor character and made it something special.

Is Actor Seeks Role, or your approach to filmmaking in general, influenced stylistically by any other films or directors?

I was re-watching a lot of my favourite older New York films to prepare for this one. Crimes and Misdemeanours is a tone that I like a lot. Some of those great 60s and 70s Dustin Hoffman movies too. Midnight Cowboy is so wonderful at capturing this very lonely and bleak side of the city. That was a big reference in terms of mood and shooting style, especially the use of long, slow zooms for exterior walking shots. We tried to find parts of the theatre district to shoot in that still have that vintage look, but it’s obviously very difficult now. There’s literally only like a half city block left that still somewhat resembles the era I was looking for. You have to kind of squint to see it.

The edit for me is always very exciting, as post is a largely creative time. You finally have a chance to breathe and sit with what you have. It’s a period where you come up with clever ways to fix all the things you didn’t do during the shoot. My editor and I worked very closely over a few weeks in finding the right pace for the story to unfold.

One of my favourite moments in the film is the scene where Paul is brushing his teeth and discovers his gums are bleeding. The bigger reveal for the audience in that scene though, is that his back is covered in a really bad rash. It’s a very strange thing that we’re learning at that moment. There’s kind of a foreboding presence, but I like disguising it as a very ordinary scene with just the mundaneness of the public radio programme on in the background and morning light pouring in off-screen.

Are you currently working on any projects?

I’m currently in-development of making a feature film adaptation of another short film I made, titled Palimpsest. 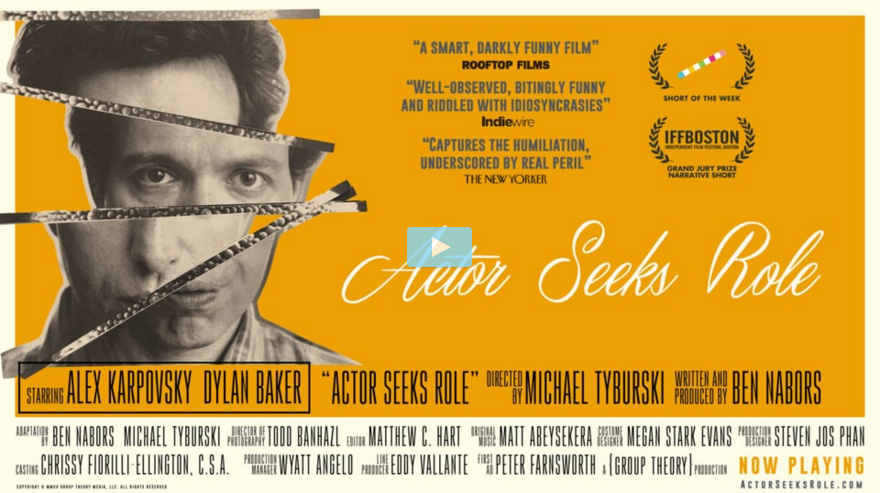