Quiz is an independent American horror short film directed by A.D. Schmidt. The unsettling storyline tracks our apprehensive main character, played by David Kilgo, who receives a peculiar automated text message just after midnight, to which he responds perhaps a little too complacently. The string of text messages then develops into an uncomfortable quiz regarding our main character’s mortality. With the director’s use of shady lighting, chilling sounds and a creeping pace, the suspense intensifies and lures us in further with fearful anticipation until the frightening end leaves the film with a bereft, ambiguous cliff-hanger. We spoke with the director about his inspiration behind this successfully haunting short film.

What is it about making horror films that grabs your interest?

The great power of film, I think, is its ability to affect us emotionally. There’s no artistic medium that does it better. Horror films come with the clearest emotional roadmap of any genre to achieve that. Build-up. Release. Catharsis. I find myself attracted to that idea of catharsis – I think it’s one of the big reasons why we as a society love to go to the movies. Quiz was my first foray into the horror genre, but it certainly is a fun space to work in. It’s deeply satisfying when your work resonates with people in such a primal way.

What inspired you to create this short based around a text conversation?

Films, particularly horror films, are often at their best when they tackle subjects common to all of us. Cell phones are intrinsic to life in the 21st century. Everyone has one. Yet, filmmakers often have a very hard time dealing with how to portray cell phones and texting. Do we show a text message and risk boring the audience, or do we use a cool graphic or text bubble instead and risk taking the audience out of the picture? For me, it’s a fun challenge to take an activity normally seen as boring and turn it into something engaging – even terrifying. I think we successfully achieved that with Quiz.

What was the motivation behind featuring the singing?

Too often short filmmakers don’t consider the power of sound. Sound drives tone. It has an immense effect on the emotional punch a film has. With Quiz, I knew from the beginning I wanted to put a lot of work into creating an impactful soundscape. Of course, the singing played a major role in that. As the tension of the film builds toward the climax, the singing grows louder and louder. So, the narrative functionality of it was important. Beyond that, I just think hearing a creepy voice echoing through your house in the middle of the night would be pretty scary. It was a natural fit for a film like this, and I think it adds a lot to its overall effect.

The shadowy lighting and low volume static in the background is certainly effective in increasing the tension in the short. Was this inspired by any other material?

Film noir is a major aesthetic influence on me. I love compositions that play with light and dark. I didn’t want Quiz to be as overtly stylistic as a classical noir film, but that’s largely what the shadowy look is inspired by. The sound design more broadly comes from my love of bass in horror flicks. You want to have a soundscape that seeps into your bones, that you can’t escape from even if you close your eyes. We were lucky to have a brilliant team of composers to create that. Patrick, Ben and Chris crafted a score that’s as compelling as it is unnerving.

Was the climactic ending inspired by any other horror films in particular?

I’ll be vague here, I don’t want to spoil the ending for those that haven’t seen it yet. I can’t say there was a single specific film that influenced the shot. The idea behind it isn’t particularly uncommon, it’s something you see in a wide variety horror films, to the point that it could be considered a cliché. However the way we decided to shoot it is a bit unconventional, which I think gives a unique spin on the scare.

Do you think, if you ever received that first text message, that you would reply with YES? Would you want to know the answer?

It’s an interesting question – if you could know the date and time of your death, would you want to? Mortality is the one theme that pervades my entire body of work. The way we deal with confronting death and the very fleeting nature of life is something I’ve found to be a very interesting idea to explore. In the case of this film, I don’t think I would want to know the day I die. It’s more fun to live life not knowing what the future holds in store.

For the past year I’ve been writing a screenplay for my feature debut. It’s a film that will explore topics ranging from the meaning of life and the human condition to the nature of filmmaking and the current state of independent film itself. I’m also directing a thematically similar short film that will be going into production this summer. It’s my most ambitious project to date, and something I’m very excited about. 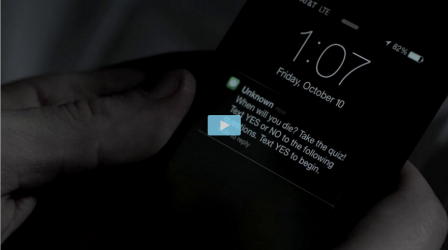 See more from A.D. Schmidt on his Vimeo page here.

This entry was posted in Features, Interviews, SHORT FILMS and tagged A.D. Schmidt, Quiz, US films. Bookmark the permalink.