Navidad is a simple, yet powerful, very human drama that exposes both the worst and the best sides of relationships.

It’s Christmas Eve and Aurora (Manuela Martelli), Alejandro (Diego Ruiz), a fifteen-year-old runaway girl and a stray puppy find themselves spending it together in rural Chile. Aurora and Alejandro’s friendship is put under strain but the appearance of fragile and diabetic Alicia (Alicia Rodrí­guez), collapsed in the garden, brings them closer together.

Despite there being little age difference, Aurora instinctively mothers the troubled teenager, who’s in search of her father, but their relationship soon takes on a new dimension. Each of the characters have their own problems, but when brought together, they seem less important and their carefree, youthful side shines through.

This is a film of rebellious but “˜good’ youth. Nothing is conventional: Alejandro has been kicked out of school and home; Alicia has run away from her mother’s and Aurora is a totally free spirit. She seems to be unsure of her sexuality but it’s refreshing to see that it doesn’t cause her any great turmoil –expressions of sexuality come naturally in this film. 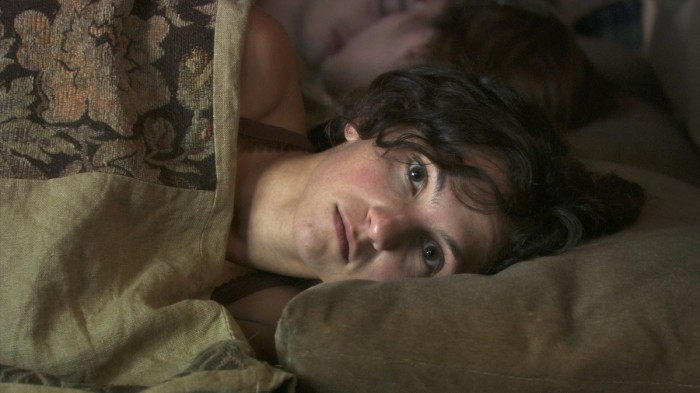 Navidad (Christmas) has a small cast and little plot or movement. The film is almost entirely set in the abandoned house in the countryside that belonged to Aurora’s father. His LPs –the reason of visit to the country house, introduce a hippy sound resonant with the youthful vibe of the film itself. The characters sing and dance in the midst of their problems, taking refuge in the lively beats and memories the lyrics evoke, such as “Libre debe ser” that Aurora performs. Dark shots mostly accompany this colourful music and the settings are simple, both inside the cottage and in the wild nature. Simple ideals, simple human affection and a simple way of living are what these teenagers in their bubble in the countryside seem to represent. Only in this setting do such attitudes seem possible.

The performances of all three are worthy. Rodrí­guez captures the naivety and loneliness of Alicia whilst Martelli is a strong and self-assured woman, rather than teenager, who leaves Alejandro very much in her shadow. Ruiz manages to perfectly embody a young man, still unsure of himself, trying to do the right thing. He often seems to hesitate before deciding how to react to her behaviour.

Navidad has an honest quality about it. It is in no way pretentious and it strips back the characters to reveal human instincts, away from the mould society so often enforces on us.