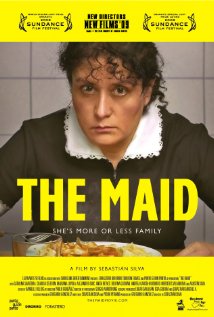 For those who aren’t aware, it’s very common in Chile for a middle-class family to employ a maid, known as a “nana”. Raquel has served as The Maid for the Valdes family, a family of two teenage kids, for over 23 years. Due to the amount of chlorine Raquel uses for household cleaning, she begins to suffer from dizziness. So Pilar, the mother of the family, decides to hire additional maids to assist her in her daily chores. However, Raquel isn’t fond of the idea at all, and makes numerous attempts to drive away maid after maid. Eventually a young maid named Lucy joins the family, and manages to make Raquel see things in a new light.

The film’s poster reads “She’s more or less family”. This is a debate constantly brought up in the film, and it makes Raquel very insecure and constantly conflicted. On the one hand, she’s an employee who works for the family, but on the other the family treat her as if she were one of their own. Even though the parents know that she has flaws, they refuse to fire her because she’s been so loyal to them for all these years. That, and that they’re aware she’d have nowhere else to go if they did let her go, so they have mixed feelings for her.

In a way, Raquel is like the third child in the family, and acts that way in the film. To her, another maid coming into the house is like a newborn baby stealing away all her attention – but it also further enforces the idea that she is a maid and could easily be replaced by another.