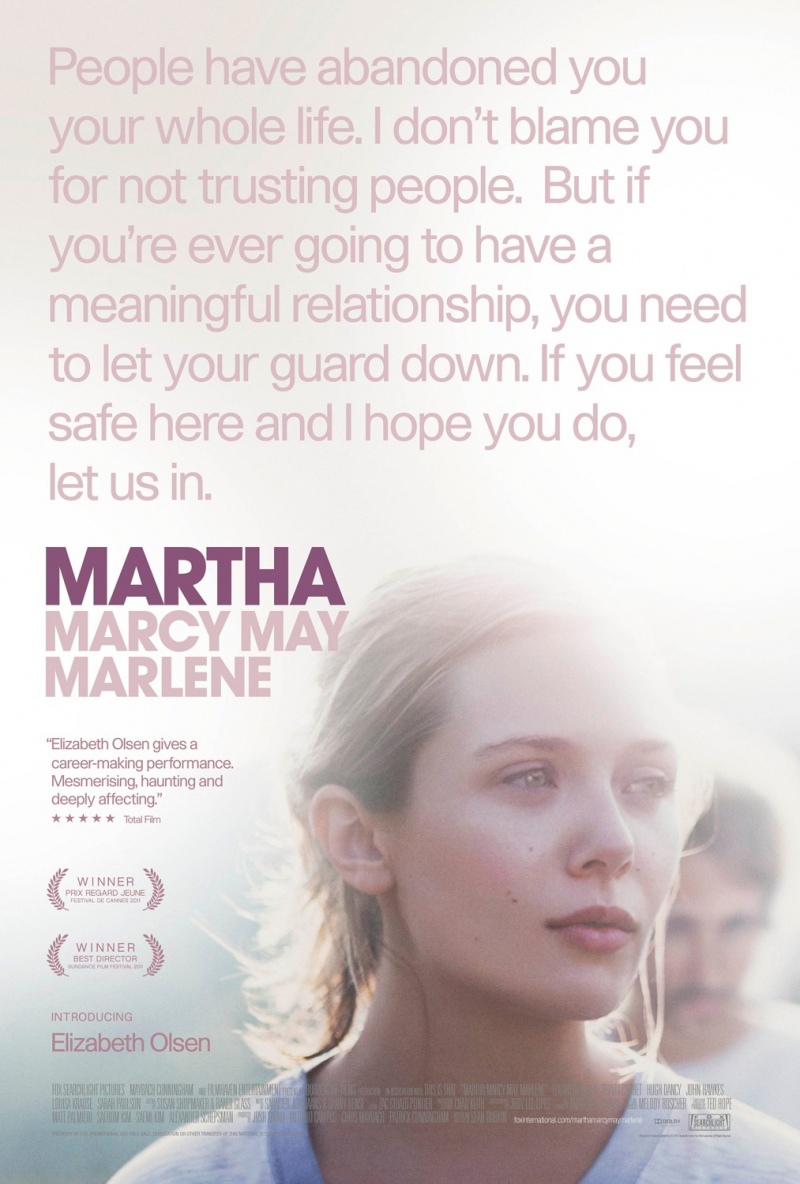 Martha Marcy May Marlene, a US drama shot in twenty days on a low budget, has more than meets the eye behind the facade of an extravagant title.

The movie centers on a young woman Martha (Elizabeth Olsen), who gets in touch with elder sister Lucy (Sarah Paulson) after two years of complete silence. Following a family reunion, she stays with Lucy and her husband Ted (Hugh Dancy) in their luxurious house by the lake. The couple is gradually alarmed at Martha’s odd behaviour, soon followed by the outbursts of delusions and paranoia. What Martha never tells them is that she had spent the last two years in an abusive cult group at the Catskill Mountains, fleeing precisely the day she phoned her sister.

The narrative is divided between Martha’s days at the sect and her presence at the sister’s house, but does not sway away to any kind of a backstory or a psychological analysis of the protagonist. The transitions between the past and the present are edited ever so smoothly, allowing the audience to follow the tension Martha feels. The film is devoted to Martha’s confused state of mind, as neither her sister nor the audience may hope to have a clear explanation of her situation.

The script of Martha Marcy May Marlene was largely inspired by a real story of Charles Manson and his cult group Manson family in the late 60s. There might be other, less apparent sources of inspiration to the film. Scenes at the Martha’s sister house by the lake feel reminiscent of the iconic Gene Tierney’s movie Leave Her to Heaven (1945). Occasionally, the film channels the vibes of the Ingmar Bergman’s Persona (1966)and iconic Hitchcock’s film Psycho (1960), both great favourites of the director Sean Durkin.

Elizabeth Olsen, making an acting debut with the film, steals the spotlight as the lead character of four names but no clear identity. She is Martha to her sister and the world, Marcy May to the cult group, and Marlene answering the phone for her cult group. Olsen’s performance, dubbed by many as one of the biggest 2012 Golden Globes snubs, effortlessly captures a woman who loses every last bit of her own persona, to be replaced with the dangerous values of the cult and an inexorable shadow of a psychosis.

John Hawkes (Lincoln) shines in the role of an enigmatic leader of the cult group, Patrick, embodying a man capable of instilling a slavish admiration in his followers, breaking their will and lives. Hawkes, providing an essential antagonist to the film, is showing off his singing skills as well, performing the songs “Marlene” and “Marcy May” by a classic folk singer Jackson C. Frank.

Martha Marcy May Marlene builds an atmosphere of continually mounting terror Martha is failing to suppress. Her violent memories, still as vivid as yesterday, will put the audience’s disturbance levels to the test. There’s only so much one can endure before losing one’s identity.