Compliance will make you q 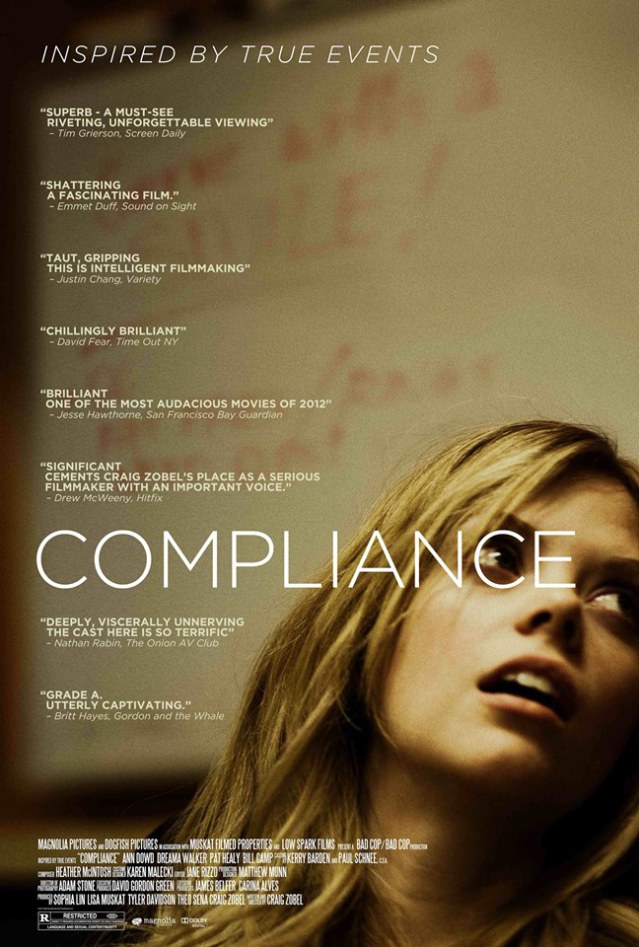 uestion humanity, logic and reasoning. This intense shocker of a film is set on a busy day at an American fast food restaurant, “ChickWhich”. Sandra the manager receives a phone call from a police officer regarding a theft claiming that a customer has reported a stolen purse taken by one of her employees. Not questioning the authorities, the manager “complies” with the officer as best she can.

Becky, the accused employee, swears her innocence despite the officer’s claims he has evidence from the CCTV footage. Sandra, having no reason to doubt the officer, allows the him full disclosure and warrants a strip search, forcing the employee to strip completely without full knowledge of the officer’s legitimacy. The shots are very intimate and raw, not leaving anything for the imagination, this makes us feel very self aware. Becky is left with nothing but an apron as Sandra confiscates her clothes under the officer’s orders.

The story progresses as the officer relays facts about Becky’s home life and makes accusations of drug dealing to further his cause against her. Meanwhile Sandra is struggling to manage the restaurant whilst dealing with this matter, the officer asks Sandra to have a male employee (for security reasons) to keep watch over Becky. Eventually Sandra must leave her fiancé Van to watch her. Compliance voluntarily makes you feel uncomfortable – especially in these later scenes, not wanting to give too much away.

The manipulation of power and the animosity of over the phone conversations really brings fear into the story. Director and writer Craig Zobel exploits naïvety and general human logic in such a way it angers and upsets the audience that what is happening is being allowed. Issues of feminism and youth are also bought into play as an older female manager allows this manipulation to happen on her young female employee. Zobel has managed to leave his audience feeling disturbed at these events and even more so knowing that this is based on real events.

Compliance comes pretty close to the most disturbing movie I’ve ever seen. What movies have you seen that fall into this same category? Share them with us in the comments below.