After voting to leave the EU last year, Britain recorded a notable surge in hate crime. What’s more, it seems that Muslim women have regularly been experiencing these attacks. Brexit Unveiled reveals this shocking trend and explores what may motivate attackers to target this specific group in Britain today.

Hate crimes in the UK increased by 57% post-Brexit. From your experience, why do you think this is?

Aisha (A): Unfortunately, I think some people misinterpreted the Brexit campaign and have used the opportunity to green-light their racist sentiments that they had beforehand. Also, if you look at a lot of the key individuals and who was getting a lot of airtime and a lot of coverage by the mainstream media, it was usually the people on the more extreme side of the debate. Regardless of whether someone voted for Brexit or not, we’re not here to pass judgement on that particular political choice, it’s more in regards to the rhetoric of the campaign and the rhetoric of the ‘leave’ campaigners especially.

So, why do you think there is an increase in hate crimes particularly against Muslim women?

A: Well, first and foremost, women are more visible. If they wear a hijab it’s quite easy to identify them as being Muslim, whereas, unless a man is going to the mosque in certain clothes, in day-to-day life it might not be possible to visibly tell that he’s Muslim straight away. Also, I think women are perceived to be more vulnerable, or easier targets, which is very unfortunate, but this is the reality of the world we live in. I definitely think Muslim women are incredibly strong but I think with women generally, not just Muslim women, there is a perception that we are a bit weaker, but I don’t think it’s true!

A: For me it was a mixture of the two. Living in London, a very multicultural city, I have friends from all walks of life. So, it was through personal connections. Also, through the attacks against the previous NUS president as well. She was the first Muslim woman, and individual, to be elected as the NUS president. It was a mixture of hearing about it through other people and then my own personal connections.

So, tell us a bit about Yasmeen Sabri…

A: She’s an artist using visual art as well as media and videos. She’s a Muslim herself, that’s her cultural background, but she doesn’t wear the hijab. She wanted to explore the impact of a veil on a woman’s everyday life in Britain. She had an art exhibition at her university and she also created a lovely video of different women wearing a veil to see if they were treated differently and what the reactions to them were. It was a really lovely piece, but unfortunately she was the victim of a hate crime at her exhibition. That was really the catalyst for getting her involved and interviewing her and hearing her side of the story.

There’s another woman in the film – how did you meet her?

M: Heena Khaled; we met her through Victoria Bridges and she said that she would love to get involved.

Through the people that you’ve interviewed and the discussions that you’ve had, how do you think these crimes can be prevented?

A: I think that’s a very tricky question. In Britain we have colonial legacy; this is not a new phenomenon, it’s just that the people being targeted are slightly different. I think it needs multiple approaches. I think that not only is there racism and Islamophobia on the streets and in everyday life, but I think it’s also systematic. I think that both of these areas need to be targeted. I think there need to be more opportunities for people of colour, Muslims, and other underrepresented groups. I think there needs to be more of an effort to provide more opportunities for those groups to go in and make that change in areas where they are underrepresented and to show people that we’re more like them than we are different.

M: We’ve actually said at a panel discussion that us being people of colour and having created a film shows the potential and that we’re not just going to create a film that focuses on, for example, our culture. We’ve proven that we can actually focus on another area that we’re not so familiar with. I feel like platforms for people of colour, Muslims, and other minorities need to be pushed.

A: Not just in front of the camera, also behind the camera and in other careers, such as government. Things really need to change at the decision-making level. There is Prevent legislation at universities but I think there is general misunderstanding. For example, the horrific mosque attack in Finsbury Park. I think that actually it needs to be a wake-up call that you can’t persecute a whole group of people just over the actions of a few. There needs to be more of a conversation, as well as action.

Of course, and representation in the media is so crucial, so what you guys are doing is absolutely amazing.

If you could have anyone watch your film, who would it be?

From showing the film to ordinary people already, what has the general reaction been?

M: For example, I showed it to my friends and they really enjoyed it. It’s not something they’d usually watch regularly, but they really enjoyed it and said that it was an eye-opener, not just for Muslims but for victims of other hate crimes too. The reaction was positive. At a panel discussion one man did say something very important; he asked us how we are protecting these Muslim women that we are filming. That was a good question and we said that we would never pressure someone and obviously as filmmakers there are certain ways to go about it: you can blur faces, you can do camera tricks, you can change voices. We did ask that before we filmed and we would never put someone in jeopardy in their community because I understand that in some Muslim communities people can’t go on TV because they’re afraid of an attack on their own community.

A: It’s about being an ethical filmmaker and being understanding of the communities you’re talking to. You’re asking for their help and their assistance and their contribution. It’s really important to remember that your role as a filmmaker is to be a facilitator, it’s not to lead, it’s not to pressure.

You made the film with Global Girl Media UK. Who are they, what do they do, and how did you get involved?

M: Global Girl Media is an organisation that aims to focus on young girls from around the ages of 14 to their mid-twenties. They train you in terms of documentary filmmaking, journalism, they teach you how to write, they teach you how to research. It’s not a one-day thing, you take the skills with you. For example, I studied last summer with them before I went to university and I feel like I’ve taken the skills from Global Girl Media into university. People in my class can see that I don’t get stressed because I’ve already worked in media and film, so I understand how to take a critical approach and adopt it into my studies. I’d definitely recommend Global Girl Media to any girl.

A: It’s an all-female organisation, which I actually think is one of its best characteristics. Just being around a group of girls and being able to talk about issues that maybe sometimes you’re not comfortable talking about in front of guys. Also, it’s just creating a space where actually, if we look at the media today, women are represented in front of the camera, but behind the scenes, for example editors and camera-operators, they do tend to be very much male-dominated. On top of that, they’re often white males. I think, to be in a space where it’s females on every aspect of the production, you’re getting a different point of view, you’re getting a very different film.

Do you think as filmmakers you will continue to make films about social topical issues?

A: Personally I’m very much drawn to social issues, I want to keep making documentaries that hopefully add something positive to society that people can take on board and take something from. I think as a filmmaker that you have to want to say something that you feel is important.

M: I agree, I want to create films. Obviously documentaries are films, but with a (fictional) film it’s more experimental. I feel that the message can be deeper than a documentary. I feel like documentaries focus on having sympathy for a particular person. Whereas a film explores different aspects and I can leave the audience to think what they want. I want it to play on their minds. I’m definitely going to still create films.

So, what’s next for you both?

M: I’ll leave it as a surprise…

A: I’m currently interning at The Guardian and I just want to get as much experience as possible. I want to keep making incredible films, I want to make them about topics that I’m really passionate about and I actually want to do something next on Afro-Caribbean hair. 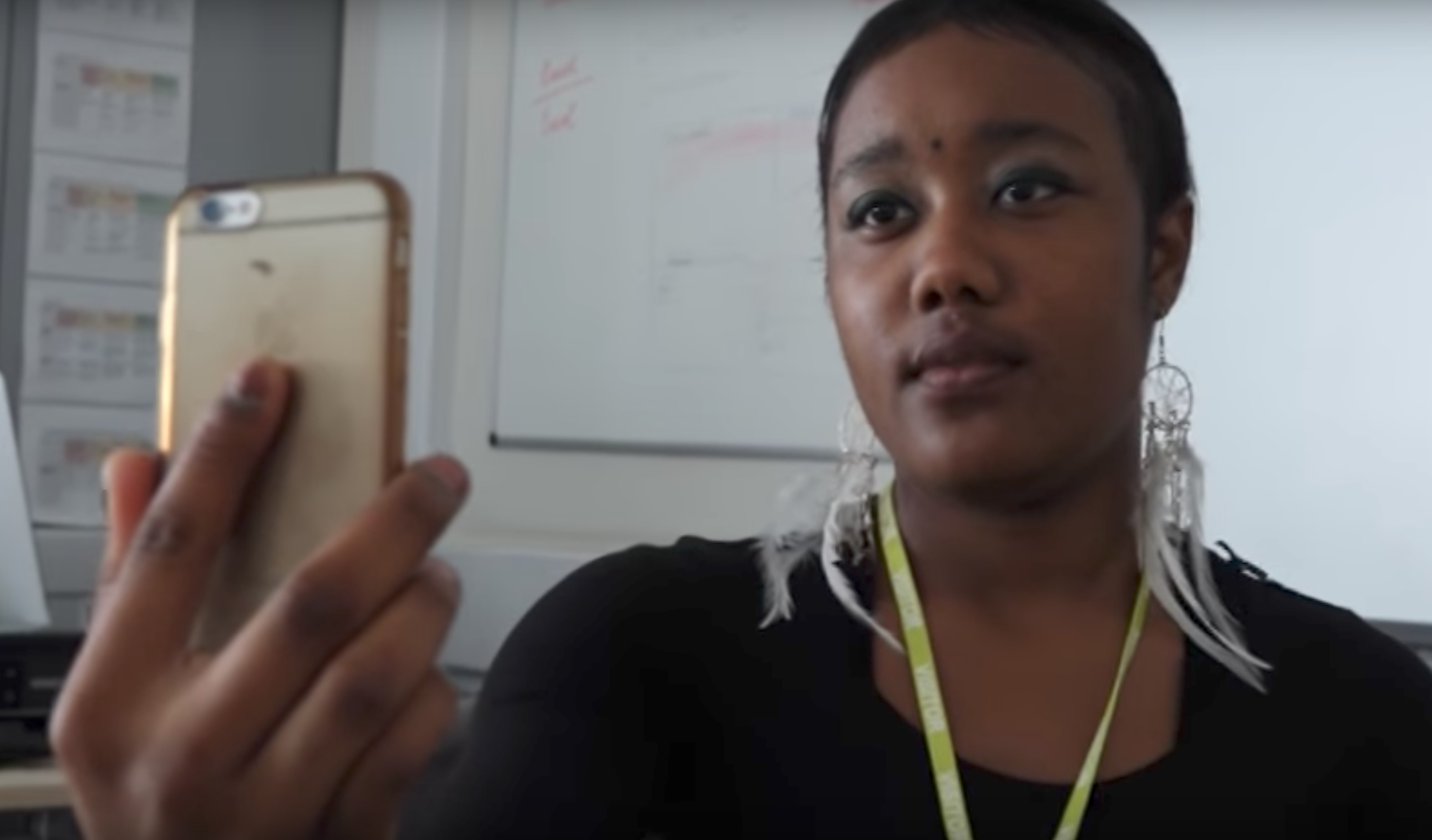