“There’s a lot of nothing before you reach the next bit of something”.

Nothing. Nothing surrounds the house. Nothing ever happens. Nothing apart from an occasional car crashing into the house.

In Supernova Tamar van den Dop perfectly crafts the unusual situation where we find ourselves actually wanting a young man to be involved in a serious car crash… Yet rather than being sadistic, we are being sympathetic –sympathising with bored teenager Meis (Gaite Jansen), her unemployed father (Bob Schwarze) and her desperately unfulfilled mother, played by none other than the multi-talented director herself.

Beautiful shots of the painfully flat landscape that surrounds the house on the corner add to the sense of boredom. However, we as viewers are never left bored. Meis’ internal humorous thoughts provide us with entertainment, as they do for her. There is a voyeuristic element to her character as she is spectator to the night-time escapades of a group of bikers, who momentarily satisfy her sexual curiosity. She is constantly on the lookout, waiting for something to happen. We see through her eyes, hungry eyes, searching for her ‘Brad’ or her ‘Pitt’, and at the same time she is equally desperate to be seen, sometimes putting herself in sticky situations in the process.

At times Meis is a naïve girl grappling with her sexuality and coming of age, at others she appears above her years, or at least certainly more sensible than her parents. Whilst her father depends on religion to answer his prayers for a car crash (will Mary also sympathise with this pathetic man as we are inclined to?) and repeatedly battles with the curve warning sign, kicking wildly like a toddler having a tantrum, his daughter reassures herself that it will happen based on scientific theories. 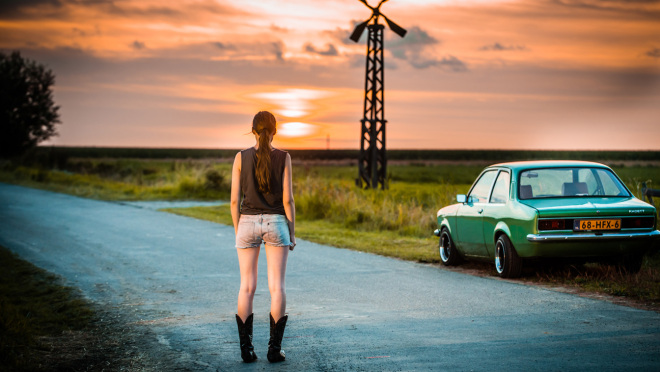 Van den Dop’s characters are both complex and highly realistic. Whilst waiting for a car to crash might seem absurd, the film otherwise has a high level of realism, achieved in part thanks to the mundanity of the family’s life. The camera focuses on the most banal activities and turns them into spectacles, such as in the rather uncomfortable dinner scene. Alongside these carefully sculpted characters stands the house, itself having a central role in the film. We could go so far as to consider it a member of the family, one who’s favoured by Dad but who’s had a fall out with Mum –she’s had enough and wants to leave for the city. Sister Meis seems ambivalent, as long as she gets to meet her Romeo.

The beautiful Gaite Jansen, whose slender body is shown off in what seems to be a uniform of hot pants and crop tops, is brilliantly convincing in her role as bored teenager. Her constant longing for a car to crash is not far removed from her desire to discover herself, to be a woman. Van den Dop tackles the theme familiar to all of us: coming of age. Whilst it’s true that it’s an uncomfortable period even for the best of us, it’s also true that it never ceases to make interesting viewing. The young actress isn’t the only strong performer. Van den Dop and Schwarze play excellent supporting roles, as does Helga Boettiger as the difficult grandmother.

Despite its common themes, Supernova will be unlike any film you’ve seen before so be sure not to miss it.