Last year, Werner Herzog gained widespread praise for his exploration of the existential impact that the dawn of the internet age was having on society in Lo and Behold, Reveries of the Connected World. Presenting a vision of technology and the future that was equal part one of wonder and revulsion, while Herzog’s film remained firmly on the fence when it came to exploring the dangers of our increasingly connected world, Nicholas de Pencier’s Black Code offers up a more direct but equally disturbing view of things.

Based on Professor Ron Deibert’s book of the same name, the film is a frank examination of the global impact that the internet has had on matters of privacy, free speech and activism, and it rarely pulls its punches.

Taking as a jump-off the famous large-scale GhostNet cyber spying operation uncovered by Professor Delbert and The Citizen Lab back in 2009, which revealed Chinese hackers had successfully infiltrated the networks of high ranking government officials in over 103 countries across the globe, the film paints an increasingly stark image of the world and the twin online ideas of privacy and security.

De Pencier is no stranger to highlighting the dangers of our ever-increasing technology focused world, as anyone who saw his 2013 film The Ghosts In Our Machine will attest, but here he’s able to give events a global yet surprisingly personal feel. Taking in case studies from across the world that span everywhere from Tibet during the occupation to Brazil and the World Cup, it’s de Pencier’s focus on the personal stories of those involved that gives the film real heart and a bleak honesty that emboldens each of their unfolding tales of woe. Mixing new interviews with previously recorded archive footage and even YouTube clips, de Pencier is able to highlight how, despite our ever increasing connectivity, the horrors of censorship and oppression remain as prevalent as ever.

This mix of visual mediums helps give the film a sense of immediacy perhaps lacking in Herzog’s more polished, stylised work. That’s not to suggest de Pencier, predominantly a cinematographer, has not put together a beautifully shot film. Taking advantage of his documentary’s almost episodic structure, which introduces new characters and settings, each new chapter brings a new visual palette to the screen which de Pencier is happy to explore with some inventive and at times emotive camera work, whether it’s crawling through Professor Delbert’s vast bank of computers or focusing solely on his Tibetan monk subject’s weather-worn face.

It’s the universal message focusing on the dangers around personal information in our social media age that really resonates throughout a film that is as entertaining as it is thoroughly educational and enlightening. To some, the events on show will probably shock, to others they will probably serve as confirmation of what they already knew. Either way, it’s essential viewing for the western world. 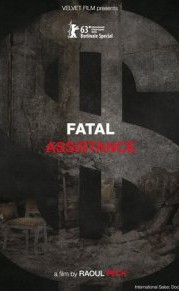 To bring this film to your region, cast your DOOVote on the Black Code page.