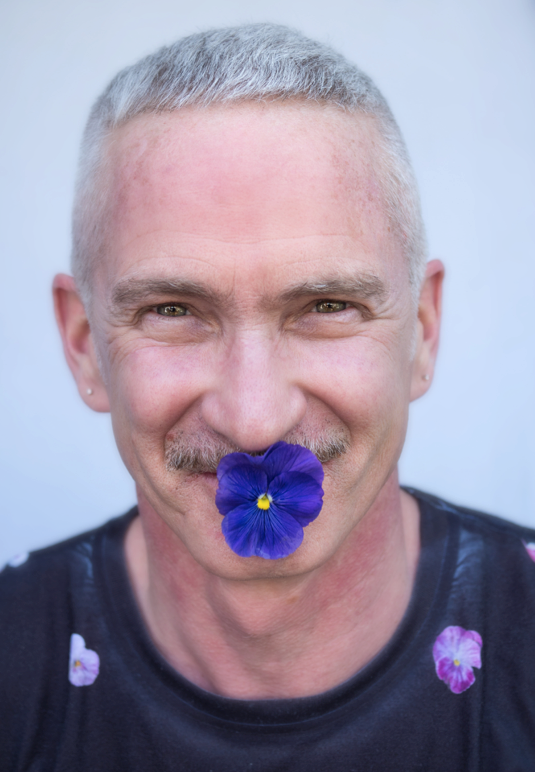 Set in various towns and cities in France, the documentary allows viewers to follow Harfleet on his artistic journey, witnessing the process behind each photograph and hearing each victim’s story first-hand. Erreca’s collaboration with Harfleet offers an emotional yet hopeful journey of how The Pansy Project spreads awareness about the prevalence of homophobia while also shifting spaces of violence into ones of understanding and hope. Erreca speaks with Filmdoo about his filming process and experiences working with Hartfleet.

I know that you’re deeply committed to LGBTQ representation in your works, what attracted you to The Pansy Project in particular, inspiring you to choose it as a documentary subject?

I was working on a documentary project on Art as a means of resistance to homophobia involving several artists around the world: Balbir Krishnan in India, Zanele Muholi in South Africa or Paul Harfleet in Great Britain. In the end, I focused on the work of Paul Harfleet because it allowed me to illustrate how to resist poetically to the increasing homophobia in France after the huge demonstrations organized against the adoption of the same sex marriage law in Spring 2013.

In 2015,  the 20th anniversary of the “˜Gay Night’ , a program broadcasted every year with LGBT films and documentaries on the French channel Canal +, we wanted to focus on homophobia that was freely expressed after these demonstrations; a lot of horrible words were pronounced against the LGBT community, violent abuses were reported frequently. The Pansy Project gave us the opportunity to treat the subject in an original and symbolic way by showing the victims’ resiliency in the face of this wave of hatred, as well as showing the audience the moral and physical violence they were facing on a daily basis. With Paul and his art, we could respond to discrimination with examples of the everyday homophobic abuses within the family, at school, at work and in public places.

How much collaboration was there between you and the artist during the filming process and in deciding on the film’s aesthetics?

Paul was involved in all stages of making the film. It was important for us that he would be 100% involved in it: he is the main character and it is also his story we wanted to talk about. We established a relationship of confidence because just like any artist, Paul is very conscious of his image and his work. For him it was different from what he normally did. Usually he would do his plantings on his own after finding stories of acts of abuse through social media. The movie brought him to meet victims for the first time and immediately measure the impact of the plantings on them. He could realize that what worked for him could also be experienced by others.

We worked together on all aspects: casting that took us almost 8 months, the script, artistic choices such as the type and color of the bike, the color of his socks, the music, the graphic work, and of course the very special color of pansies he wanted for the film! Paul is very demanding about the details, but we were speaking the same language on this point, he trusted us completely: he didn’t request to see a single image while shooting! The collaboration was very successful because we were all motivated by the same goals: giving voice to victims and allowing them to overcome their trauma. The adventure crossing France in a truck where dozens of pansies were waiting to be planted was joyful even though the stories were terrible.

There are many beautiful and serene traveling shots in the film – shots of Paul traveling by train between locations and biking through the cities and towns. Was there an intended purpose or sentiment behind these shots?

For me the idea of staging Paul in motion everywhere in France shows the importance for one to keep moving. Paul is moving on constantly, to get more understanding, acceptance, to leave behind him the painful situations of exclusion still very present in French society. Although the wounds are strong, this simple flower empowers you to move on. This motion stops when Paul listens to the stories and does the plantings with the victims. The photos of pansies with abusive quotes mark a period of stillness before leaving the trauma behind and moving on, going on with one’s life with confidence and without anger, just happy and free!

As for the beautiful shots across France, we wanted to show the beauty of the country and thus provide a contrast to the ugliness of the other experiences.

Following the artist’s process and his interactions with victims of homophobic abuse is both heartbreaking and hopeful. Were there any scenes or moments during the filming process that were particularly memorable or emotional for you?

All the stories in the film are touching. But the highlight for me remains the testimony of Jimmy, the young man kicked out of his home by his father, shot in Lille. The film did him a lot of good as he was struggling to talk about his situation. Paul has a talent for defusing tensions: the piece of cheese stuck on Jimmy’s nose as Paul points it out to him is part of those moments that help relieve pressure. The other moment that always pulls me to tears is when Nassredine, the young and handsome Imam, sings in the Church in Strasbourg. When I was filming I started to cry as his singing in Arabic was so beautiful and powerful, echoing within the tall walls of the old protestant church. I didn’t expect it: I still notice a little camera movement caused by my emotion when I was filming him. Nassredine risked a lot speaking openly. All the witnesses have given us so much by opening the doors to their intimacy.

There seems to be a natural emphasis on youth, coming-of-age, and memories of childhood in Pansy!. What message do you hope your documentary passes on to young viewers today?

For the younger generations, the film has impacted them very hard, because for many of them homosexuality wasn’t perceived as a problem anymore. Some could not imagine that such situations could still take place in France, so close to them. They are sometimes shocked by the stories, and this is a good thing! The film opened their eyes on the work that remains to be done to help those who are harassed at school, in their family or in the street. I hope they got the message and that they will be aware of the feelings of a classmate who suffers ridicule on a daily basis because of his or her difference. The film was shown in many festivals with young crowds (Stockholm, Bombay, Geneva…) and Paul often did plantings with them in their home cities. The Pansy Project is an original way to bring awareness to the younger generation because of its originality and poetic approach, with no preachy intentions.

Are you working on any new projects right now?