INTERVIEW: MARTIN ROSETE ON VOICE OVER

Voice Over is a unique story about extreme hardships and all-encompassing love taking place in four different settings. The story arc transcends the constraints of time and space, allowing the short film to ask universal questions about human nature. The list of skills needed to construct four completely different worlds and bind them together is impressively long, which has earned the film several awards and nominations. The director of Voice Over, Martin Rosete delves into his spellbindingly original work to give a glimpse of how it came to be.

The script of Voice Over stands out with its original premise. What appealed to you about it? What caught your attention when reading it for the first time?

I was looking for a very powerful and visually outstanding story and when I read Voice Over, I knew it was perfect. It is the best script I have read in my life. It is a beautiful story written by Luiso Berdejo.

The film takes place in four very different locations. Even though it might have made the production process more complex, it also offers an opportunity to showcase an incredible array of different skills. How did you find orchestrating such a diverse project?

Producing this short film was a miracle. I knew from the beginning that with such a powerful script, the visuals and the narrative had to be at the same level because otherwise it would look cheap.

We did not have a big budget and making the film was only made possible due to the commitment of several of the best producers in Spain such a Sebastian Alvarez, Koldo Zuazua and Manuel Calvo.

We shot the film on the Canary Islands. It was the best option for finding such stunning locations.

No. The script was so well-written that it was really easy to visualize and see that everything was going to work very well.

Have you worked with child actors before? And was the kiss we see in the film actually the first kiss for these youngsters?

Yes, I have had the opportunity to shoot with kids in other films and in commercials. For me, the key is to cast them well and let them have fun – help them relax and think of the process as if it were a game.

Javier (Cidoncha), the kid from the film, has been working in TV and film for a long time so he has a lot of experience with shooting and he told me that he has had to kiss a girl before.

For the girl Luna (Montignier Peiro), it was her first shoot and also her first kiss, so she was more nervous and Javier helped her to relax. One thing I love about the end of Voice Over is that the kiss is not perfect, it is a scared and shy kiss. That is exactly how I wanted it to be because that is how I imagined the first kiss between kids.

You and the screenwriter probably know the script better than anyone else in the world. What is Voice Over about for you?

It is a love story with a very powerful set-up. It is sweet and subtle at the same time. And it gave me an opportunity to show my skills while shooting action and other complicated scenes like the ones underwater.

Voice Over can be interpreted to be a story about a story, a kind of metanarrative. Is that something you were thinking about while making the film? Have you been exploring similar topics in your other films?

I love the use of the voice over in films when it is well done. Actually my first short film which I shot when I was 21, Revolution (viewable here), also included this element. It came out very well and won a bunch of awards at festivals.

Coming back to Voice Over, I really like love stories with a different approach – in this case, the film includes elements of sci-fi, scenes of war and shots underwater, and love is the common element that binds everything together.

Yes, I am currently in post-production with my first feature film Money starring Kellan Lutz, Jamie Bamber, Jess Weixler, Lucia Guerrero and Jesse Williams. It is a thriller shot in New York and I am really happy with the result. (more info here)

Watch Voice Over free on FilmDoo.com. 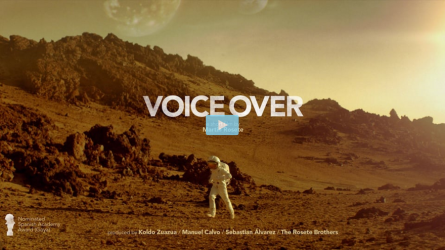