Swedish director Alexandra-Therese Keining follows up 2011’s acclaimed Kiss Me – the passionate story of a young woman having doubts about her upcoming engagement as she develops feelings for another woman – with her new film Girls Lost, a darker, more fantastical tale of conflicted identities. When school friends Kim, Bella and Momo discover a magical flower with nectar that can turn them into boys, this strange ability creates an opportunity for the three girls to explore new ways of life while discovering hidden sides to themselves.

I was fortunate to sit down with Keining to discuss the themes and ideas behind this engrossing and insightful work.

Going into this film, 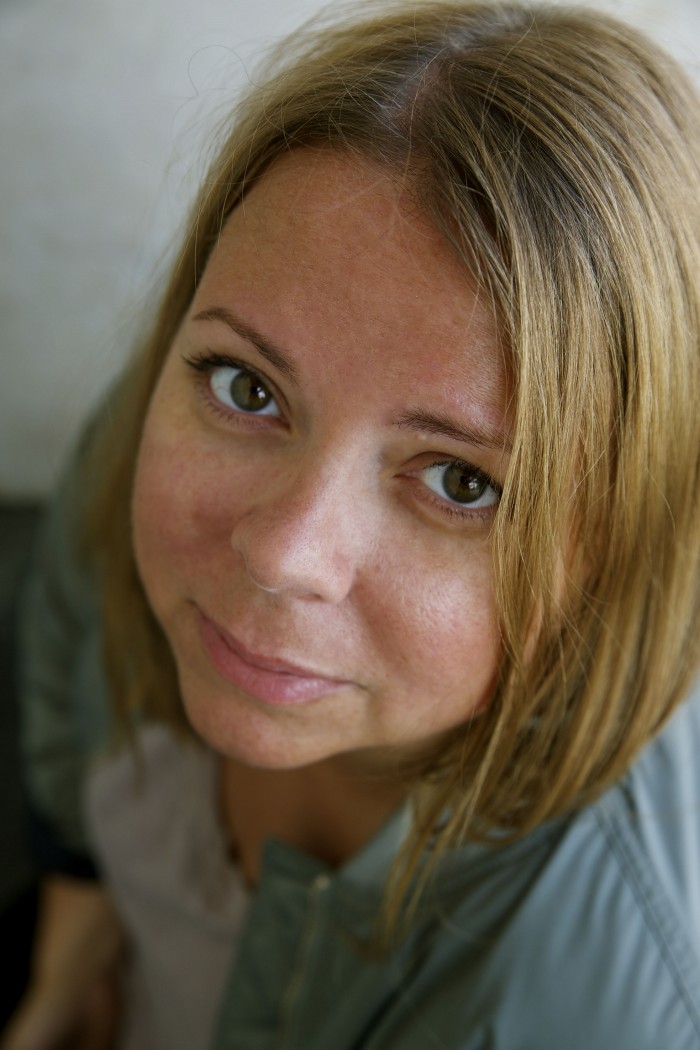 what was your original vision? What were you hoping to make?

I think I just wanted to make something that I’d never done before, something completely different, and I was really inspired when I read the novel because it has such a magical realism to it. It’s all over the place, it’s sort of cocooning the story, so to speak. I really wanted to get that feeling and I was thinking, ‘How on earth am I going to do that?’ So I sat down with the photographer and special effects people and the music and we discussed how we would get that kind of feeling and atmosphere. Overall it’s something like its own universe that’s very different.

So what would you say appeals to you about magical realism?

It’s almost like a fairy tale and I used the magic as a tool to create these situations with fluid sexuality and fluid identity. I’ve always been very inspired by dream-like films and dream-like stories which have a quality of being a bit unbelievable. I thought that would be a great atmosphere for this film.

Are there any particular stories and artists that inspire your work?

To tell the truth, I read Orlando by Virginia Woolf when I was quite young and then I saw the film by Sally Potter and I think that’s where I intentionally got the idea of having two actors playing the same character. That was part of the setup for me and then I really like movies by David Cronenberg and Alien.

And do you also draw inspiration from anything personal to you?

I do. Actually, it would happen before filming that I’d dream a situation or I’d dream about a scene that I’ve written differently in the screenplay and then I’d do it the way that I had it in my dream instead of the way I’d written it. It’s something I really enjoy, to be connected emotionally and invest a lot of my own imagination and my own thoughts.

The film has the same cinematographer (Ragna Jorming) as your previous film, Kiss Me, and yet has a very different, much darker look to it. Would you say that you drew from the more gothic edges of fairy tales?

Yes, definitely. We worked a lot with the writing as well because all the shadows are pretty long, elongated and dark and that was pretty hard to create but it also gave a kind of structure to the whole cinematography area. We were just trying to do everything as effective as possible to create that kind of energy of something that is not real, something really magical, yet is in reality. Everything around it is real.

You’ve said that the kids in Girls Lost had never acted before. Was it a challenging process to get them into their characters?

Yeah, first of all just to get them to feel comfortable on a film set. When you’re young and you’ve never been on a film set before, it can I think appear a bit creepy and frightening, and there are so many people just looking at you. We were trying to create a very comfortable situation for them as much as we could, because the production plan is always really important – when you choose to shoot what scene – and we didn’t shoot the story in order. It was pretty messy. So I just wanted to start with the easier scenes and then get them more comfortable with the cinematographer and crew, and gradually it can work.

Of course, an important element of the film is the bond that the three kids have in the face of all the discomfort of their environment. Was there a similar situation off-screen? Did the actors connect much?

They did actually. They were cast a couple of weeks before we started shooting so they didn’t have much time at all to know each other but I created situations where they got to be part of the film by doing the greenhouse, planting flowers and doing things together that hopefully would make them come together as a group. Right from the beginning, when I was screen testing them, I tried to put them in different groups and see where the dynamics work. And I think the six people who are on screen had the best dynamics.

And you’ve said that you screen tested about seven hundred kids?

Yeah, we were all over schools screen testing a lot of kids that had never acted before but you could get a sense of what kind of charisma they had.

Was it a conscious decision to use non-actors or was it just how it turned out?

It was really a conscious one. It was a conscious decision to not use transgender actors as well because I just really wanted to emphasise the differences between the sexes, between when they are girls and when they are boys. When I got into the production, I think the main idea was that they would all be played by the same actors and just change the haircuts, maybe do some special effects with the voices and whatever. But I needed it to be a very physical experience as well as an emotional one.

I feel that both the new film and Kiss Me focus on characters who are trapped in some identity that isn’t theirs. In the case of Kim in Girls Lost, it’s her life as a girl. In the case of Mia, it’s her engagement. And, in both cases, when they try to break free of these lives, it can be quite messy. People get hurt and a lot of loose ends are left. As a filmmaker, is it important to you that you don’t give your characters too clean and easy solutions, that there’s a little sacrifice on the path to self-discovery?

Yes, it’s a subject that I’m drawn to all the time: self-discovery, identity issues. Sometimes they’re sexual, sometimes they’re not but I think it’s also good as a grownup to ask yourself those kinds of questions: ‘Who am I? What am I doing? Am I on the right path? Am I living the way I wanna live or the way I intended to live?’ And sometimes I think the answer might be ‘no’ and you have to really start sacrificing people and things to get there.

In that respect, could the flower in Girls Lost be considered an attempt at an easy solution that’s really only a substitute for personal growth?

I think it is. The flower is also a metaphor for purity ending and them coming into a new area of them being grownups, or youngsters, but their childhood is dying. It’s withering away, and that’s very painful because you’re going into another identity.

It seems that personal choice is a big part of that process in Girls Lost. When Kim becomes a boy, there isn’t really any need for conviction or self-acceptance because she automatically is a boy. But, at the same time, she hasn’t really developed fully as a person so she still falls into these various traps of outside pressure, such as her involvement in crime. Do you consider choice to be an important element of the film’s revelations, particularly with regard to the ending?

I think so, yeah. It’s almost like she isn’t aware that it is a personal choice. It’s like she stumbles into a nightmare and she feels like she’s finding the person she’s supposed to be and she loves that person. And then she gets lost, more and more lost. It’s almost like catharsis when she comes out as someone else and then she’s in this situation where she has to make a choice.

And it’s a more meaningful transform at the end than her temporary physical transformation into a boy.

Yeah, definitely, and also realising that she always wanted it to be a bit easier to be a boy and for that world to be a bit simpler, a world where you can be yourself and blah blah blah. And then she realises, well, not really! It’s the same issues and it’s really hard as well.

So for any teenager watching the film – or even preteen – what would you hope that they would take from it?

I would hope that they would just think twice whenever they think that they know what it is to be a boy or a girl, and maybe think about how you would treat your fellow person or realise that you might be a bit more hurtful than you intended to be.

And do you have anything else in the works?

I do. I’m actually reading a lot of screenplays right now. Also, Girls Lost was offered to be made into a remake. It’s in negotiation but I don’t think it’s something that I would be a part of. I think that they would make it a lot more, I don’t know, easy.

Can you say anything yet about these screenplays?

Not really but I’m quite happy that there are so many screenplays and stories about strong personal journeys, about finding your identity. That really makes me happy.