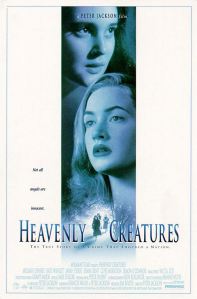 Heavenly Creatures is the film that made the international film circuit fall in love with Peter Jackson and the world fall in love with Kate Winslet.  The film was inspired by the true story of the obsessive friendship between fifteen-year-old Pauline Parker and Juliet Hulme and the fuel this friendship provided for what became a fatal fixation.

In 1950s Christchurch, Juliet (Kate Winslet) transfers to Pauline’s (Melanie Lynskey) school. The girls quickly befriend each other, bonding over their shared experiences of childhood illness and their creativity. Together, the girls create a fantasy world called Borovnia, of which they are the rulers. The world is the setting for novels they write together, and it slowly becomes just as real to them as the world that they live in. Pauline’s parents are worried by the intense friendship between the girls, and her mother Honora (Sarah Peirse) is especially concerned. But nothing they say can stop their daughter’s contact with Juliet, and the friendship continues to intensify in the slow build up to the crime.

Although Heavenly Creatures has a wide range of fantastic performances, its main triumph is Peter Jackson’s success in capturing the utter detachment Juliet and Pauline begin to feel from the real world. The production design and special effects are stunning, showing us the love for magic that draws the girls into their own world. Before we realise how disturbing it is, it is strangely easy to sympathise with their escape into fantasy. Tricks like employing extras to act as clay figures ensure that we never forget that the girls aren’t fully experiencing reality.

Winslet’s performance is extraordinary. She offers her role as the pretty, wealthy friend with an attractive haughtiness that makes it easy to understand why Pauline would be so besotted with her. It’s easy to understand how the film launched her incredibly successful career. In her debut film performance, Lynskey is also impressive, playing Pauline with an unsettling creepiness that foreshadows her development through the film. Both actresses were hired in part because of their physical similarities to the real girls the film was based on, adding an extra level of realism to the film.

This is very much a film worth watching. It was nominated for an Academy Award for Best Writing (screenplay written directly for the screen), and won and was nominated for a huge string of other awards. It is often disturbing, but also has moments of beauty and poignancy that make it an enjoyable, if very unsettling, watch.