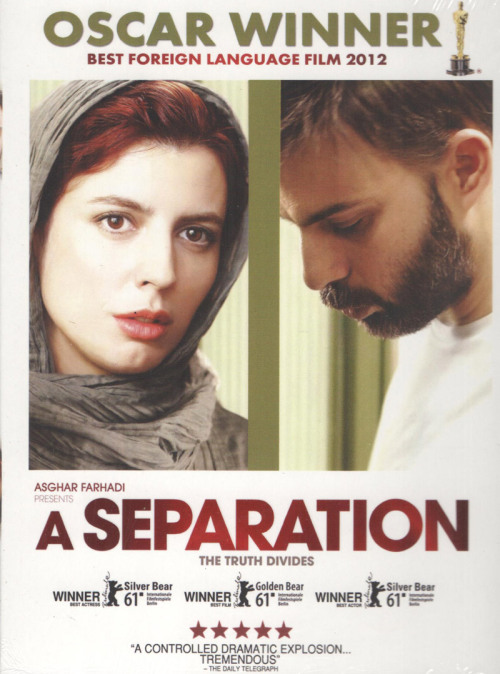 FilmDoo continues our exploration of modern Iranian cinema by reviewing A Separation, which is an award winning Iranian film which won the Academy Award for Best Foreign Language Film in 2012 and was nominated for the Best original Screenplay Academy Award, the first non-English film to be nominated in five years. A Separation is well deserved of these, and many other accolades received, as it explores many social themes ranging from wider political and religious issues and class divisions through to more personal issues surrounding the consequences of divorce on family.
In exploring these and other issues the director Asghar Farhadi is able to give a fascinating insight into modern day Iranian society. It’s also a superb court room thriller, giving an inside look into the mechanics of the implausible Iranian legal system, which Asghar uses a foundation into an investigation for the truth.

In short the film is about married Iranian couple Nader (Peyman Moadi) and Simin (Leila Hatami) disagreement over whether to move abroad to provide better opportunities for their only daughter, 11 year old Termeh (Serina Farhadi). Nader disagrees with Simin’s desire to move abroad and instead insists on staying in Iran to look after his father (Ali-Asghar Shahbazi), who suffers from Alzheimers. However, the focus quickly switches and gathers pace with the introduction of Razieh (Sareh Bayat), a caretaker hired to look after Simin’s ailing father, which triggers a dramatic chain of events driving the narrative of the film.

A Separation is an impressively acted, clearer and insightful drama, which resonates and captivates on many levels. From Asghar’s direction through to the quality of its performances the movie engages the viewer to such an extent that it leaves you questioning your assumptions and exploring the themes explored in the movie well after the credits finish rolling.

This entry was posted in ASIA and tagged Drama, Iran. Bookmark the permalink.