EVENT REVIEW: SECRET CINEMA SHOWS BACK TO THE FUTURE

I must confess I had no idea what I was actually in for with Secret Cinema. The basic gist is that they hold events where they reenact films and set-up different locations. I was pretty murky on details. I had heard stories, but even still, thought it better to keep my expectations low. I thought that there would be a hundred people in fancy dress, a hall to dance in and maybe someone would come in dressed like Marty and clumsily recite “you’re not ready but your children are going to love it!” as everyone looked on awkwardly, unsure of whether to stay in character or laugh politely.

Essentially, I was being a cynic, expecting a high-school production. I was wrong.

I was so very, very wrong.

I really should have known from the confirmation e-mail. They gave me a name and occupation and everything. On the trip down there, I wondered whether people would adopt these persona’s during small-talk, but then remembered that was the real-world and not a themed party on a sitcom where everyone treats their roles with dire seriousness. The first thing that hit me when I arrived was just how many people where there – and how many of them where in costume.

Imagine a funfair crossed with a kind of bizarre “50’s via 80’s nostalgia via 2000’s sarcasm”-lens museum and add unprecedented amounts of effort and you’re close to picturing what this thing was. When you entered the attraction (as I find myself forced to call it), you were greeted by several rows of tiny 50’s-styled houses, with mailboxes bearing names like “McFly”, “Tannen” and I’m sure other references I’m not quite dorky enough to get.

They were all single-rooms, painstakingly decorated, featuring period-appropriate décor, magazines and music (though I did see a detective novel published in 1960. For shame!). 50’s cars would drive down the makeshift roads, often captained by greasers all too eager to yell profanity at the befuddled masses. Doc’s lab was also there, complete with a very-accurate Doc lookalike (judging from voice alone here). However, the crowd there was always so thick it was impossible to really assess whether the guy was eating enough scenery to be accurate.

Beyond the houses lied the various expected food stalls, shockingly not extortionate and all appropriate – burgers, ice cream, hotdogs and the like. The variety of buildings was really shocking, too – they had clothing stores, a “bank” (full of ATMS), the Hill Valley Highschool with a dance hall playing music from the film, a few small rides acting as a funfair, a freaking 50’s vinyl shop (I guess you can’t blame Secret Cinema for knowing their hipster audience) and even a cinema complete with popcorn and movie!

They were showing Cattle Queen of Montana – remember, from Back to the Future! You probably don’t, because it was on-screen for one second in that movie. Oh, and if the crowd didn’t stick to their roles, the staff ingrained them into their being. If you were dumb enough to ask about the movie, they would all stare off in the exact same, vacant way and curiously ask “What movie?” Seriously, these guys were so into their roles one of them might well have been Daniel Day Lewis and I just didn’t notice. 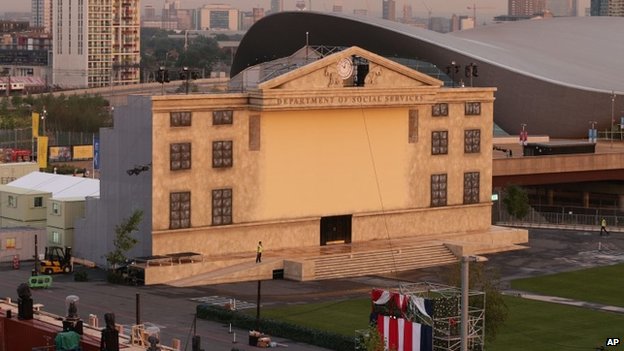 The entire thing was really scenic and pretty, and although it was completely artificial and they were obviously working with a limited budget, the devotion to and love of the original property completely sold it, and I have no idea how you could ask for more. I would have taken pictures if this weren’t a strictly no-phones event (which they were very keen on enforcing). As a quick aside, leaving the event was actually super-painless, and the organisation all-around was great.

The film itself began late, giving everyone plenty of time to explore the environment. It was projected on an enormous screen, with a large clock-face above it mirroring the iconic setting from the film. The audience sat on the grass as a Fox lookalike introduced us to the film with “The Power of Love”. I expect everyone is familiar enough with Back to the Future, but the live-action performances really added a fun new layer to the film. Actors in costume would recreate certain scenes as they happened, including punch-outs and chase scenes.

The audience went crazy when a Delorean drove out from under the screen, and even crazier when the Fox stand-in mimicked Marty skating over a car. The actors took plenty of breaks out-of-sight, and were more than content to let the film play-out. All spectacle aside, there’s a lot to be said for simply watching a much-loved film among adoring fans. They were loud and cheered, but also incredibly respectful of the story they all loved so much, keeping quiet and eagerly leaning forward for their favourite scenes.

The show-stopper was, of course, the climax of the film, as the Doc stand-in tangled from the clock face and slid down the wire as the Delorean drove off. Pyrotechnics went off went the lightning struck and, yes, the ground was set alight as the car sped away. These guys knew exactly what people wanted to see, and they delivered on every count.

There’s nothing better than having your cautious pessimism thrown back in your face. I was completely shocked by the effort, grandeur and love in Secret Cinema’s Back to the Future show. “Classic” films oversaturate the market these days. Nothing is allowed to settle comfortably into real nostalgia and nothing is allowed to be appreciated as an aged-but-perfect piece of cinema, because nothing is ever left alone.

Yes, there are constant remakes, but on the internet, it’s hard to go a week without seeing some kind of reference to your favourite film, someone who made a Millennium Falcon life-saved cake, a Goonies-themed apartment or what have you. These movies we love and internalised were never meant to feel old. They were never meant to feel stale. Yet, our love for them and constant dredging-up of them has made them just that. Familiar. Boring.

I want to thank Secret Cinema for making this movie feel new.

This entry was posted in CENTRAL/ SLAVIC EUROPE and tagged Back to the Future, event, London, review, Secret Cinema. Bookmark the permalink.