It’s really not an exaggeration to say that Richard Linklater’s Boyhood is a once-in-a-lifetime cinema experience and is not to be missed. The ambitious project was filmed for a few days a year for twelve years, and gives us a nostalgic ride throughout the noughties to show growing up in a way that hasn’t been achieved on film before now.

Boyhood begins with Mason (Ellar Coltrane) as a quiet, intriguing six-year-old. We watch him struggling to make sense of the world, confused about why his mother (Patricia Arquette) is not still with his father (Ethan Hawke) if she still loves him, and frustrated by his older sister Sam (Richard Linklater’s daughter Lorelai Linklater). We then move forwards through his life in a series of irregular, sometimes surprising jumps through time until he eventually leaves his family behind to go to university.

Although Arquette, Hawke and a strong supporting cast give impressive performances, the real success of the film is in Coltrane and Linklater, who give us completely believable performances at every stage of life, letting their characters change in maturity as they themselves grow up. Linklater once decided she’d had enough and requested to have her character killed off. It’s a good thing her father said no, as her later scenes in the film are some of her best. Coltrane and Linklater give us a lovely portrayal of a not-always-straightforward sibling relationship. 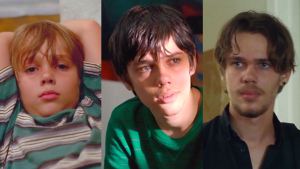 Although Boyhood would be worth watching just for reminding us of the technology, fashions and music of the last twelve years, its real triumph is in its messages about the way we move through life. Different moments contribute to who we are but are never representative of our whole lives. Boyhood offers us a huge range of characters that matter to Mason but only feature for a few minutes. We briefly encounter the girl who passes him a note telling him she thinks his new haircut is “˜kewl’, and the boys Mason lies to about his sex life, but then don’t see them again. The things that feel hugely important don’t matter at all a few years later.

There are so many reasons to watch this film. It blends a hugely complex and difficult method of filmaking with simple scripting and very real characters, and captures the transition from childhood through adolescence perfectly.