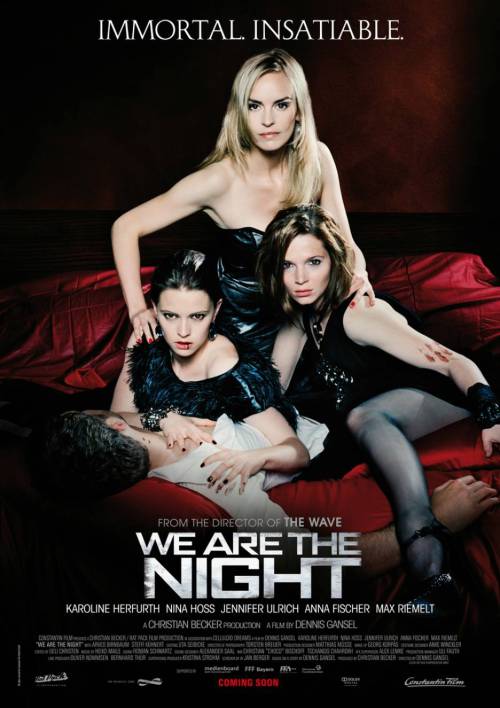 We Are the Night is a German vampire horror directed by Dennis Gansel. With a cast of strong and sexy female characters played by such talents as Karoline Herfuth and Nina Hoss, the film explores the genre of vampirism; naturally paired with romance, depression, immortality and a twist of club life in the modern world.

We Are The Night or Wir sind die Nacht tells a story of a young and troubled girl, sick and tired of her lifestyle. Midst a mysterious night club she experiences a brief encounter with an ancient vampiress leading to a spiraling gory lifestyle of shopping and fast cars at night. Romance with men is a taboo as emotions between the four forcible vampires lead to seduction amongst themselves along with hatred and guilt. She soon realises that her newfound immortality and amusing antics come with dramatic distress filled consequences.

Audiences who are fans of the more adult vampire horror flicks such as True Blood are in for a treat as Gansel gives a unique portrayal of a somewhat commercially over exhausted genre of film in recent years. With the likes as The Lost Boys and Interview With The Vampire, the soundtrack makes the film an even more exciting and interesting horror movie, with a seductive and modern world club soundtrack – the only dissatisfaction I can think of is “I wanted more.”