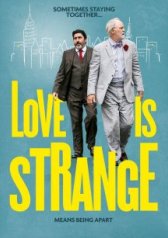 Love Is Strange
USA, 2014, 98 minutes, SD Drama, LGBT, US Indie
In this “drama” we learn that the worst thing that can ever happen to an aging middle-class couple is that they must temporarily live apart. Nevermind that in the other 99% of 40-year marriages those concerned would likely more than welcome a few months away from their spouse, whom they are frankly sick of the sight of.
But not Ben and George: two men so happily married that the mere thought of being apart for more than a day brings tears to their eyes. And indeed, this occurs on several occasions during this rather film. When George is supposed to be giving one of his private piano lessons, he is seen to stare wistfully into the distance and quietly sob.

Of course, the reason why the couple have to move out of their stylish New York apartment reinforces a more serious point - that certain sectors of society are still unwilling to accept homosexual members of the community. After finally exchanging vows after the legalisation of gay marriage, George loses his job as a music teacher at the Catholic school and he and Ben must now survive on a much lower income.

But really: after Ben and George “slum it" in the plush apartments of their respective relatives for a seemingly brief period, George luckily chances upon affordable and stylish accommodation after he gets chatting to some guy at a party.