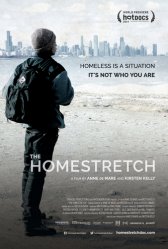 The Homestretch
USA, 2014, 90 minutes, SD Documentary, LGBT, US Indie, Teen
In March, FilmDooWorld brought you an extensive review of the documentary Dreamcatcher, in which we saw former prostitute Brenda Myers-Powell trawl the streets of Chicago offering aid to the cities beleaguered working girls. With The Homestretch, we are again thrust into the same city, in which the problems that lay at its heart are further explored. Directed by Kirsten Kelly and Anne de Mare, The Homestretch channels its focus on Chicago’s ever increasing population of homeless students and the daily struggles these teenagers must face in the hope of securing themselves a future, safe from the threat of the cities unforgiving streets.

Mare and Kelly decide to centre their primary attentions on three teenagers in their documentary, in which through each of these individuals, The Homestretch explores a whole host of issues other than that of just the cities homelessness. Through Kasey, the tough talking female protagonist, we find an individual whose plight has come to be due to her sexuality, abandoned by her biological family purely for her preference of attraction. Roque, a migrant of Hispanic descent has seen his farther taken away from him due to migratory issues whilst Anthony, the impressive wordsmith with a maturity beyond his years (undoubtedly induced by fatherhood), has fallen victim to America’s tough juvenile justice system. Yet despite the sorrow you feel for these children, seemingly robbed of the innocence all children deserve in life, The Homestretch manages to evoke feelings of positivity. For example, The Homestretch resonates on a personal level. Not because I have felt what it would have been like to be a homeless student, but because I remember what is was like to have all the educational advantages afforded to me. As I watch the sheer dedication all three characters show in The Homestretch towards cementing themselves an educated future, I couldn’t help but reminisce of my own (or lack of) educational efforts. Seeing Kasey, Roque and Anthony strive to such lengths at an age when they should be safe in security, makes them instantly likeable, an important attribute to this film. You are not left asking whether these children deserved the fate that has befallen them, instead you only hope for their resilience to prevail.

In structure, The Homestretch is ultimately reliant on those it chooses to focus its cameras on, as the documentaries structure in principle is rather basic. As The Homestretch opens up with the shocking statistic that two to three thousand children roam the streets of Chicago every night looking for shelter, Anthony, Kasey and Roque thus become emblematic of this statistic; times these three teenagers tenfold and you have the on screen embodiment of the issue facing Chicago. Choosing to focus on the episodic narratives of a small group of protagonist is a common theme within social issue based documentaries, yet The Homestretch also offers us insight into the lives of those who decide to help these individuals. In doing so, America’s stance on immigration, the heavy handedness of its juvenile justice system and quite often out-dated opinions on peoples sexuality really come home to roost. If there are strangers whom are ready to disrupt their own (it must be said, often already tested) lives for the sake of strangers, why does America have such problems? Although, sometimes unjustly, America seems completely ostracised from within its own country as its problems are constantly vilified through documentary form, it appears that The Homestretch and other documentaries of the same persuasion, vilify in order to enact change. If change does not come about, then at least being made aware of the problem is better than being oblivious.