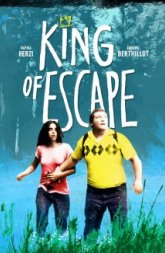 King of Escape
France, 2009, 97 minutes, SD Adventure, Comedy, LGBT, Arthouse
Quite odd and confusing but an interesting movie by Guiraudie. The lead character of Armand is the focus of the story although  his character becomes more pronounced and known with the help of a support cast ranging from his boss, to the father of Curly , Curly herself and the gay friends of Armand.  At times comedic, both verbally and visually,  what viewers can easily notice was how Armand, a middle-aged tractor salesman who's not too happy with his life seems to have a colorful sex life, both with a man and a woman or should I say, a teenage girl who's already so sexually active. Armand seems very comfortable with his body though, regardless of his bulky weight and at least a couple of scenes he is seen running here and there, amidst vast fields in the countryside, with just his underwear on.  Ludovic Berthillot portrayed the character of Armand quite well; meek, soft-spoken, harmless yet an animal unleashed where it concerns sexual adventures. Not everyone will somehow be able to appreciate the ideas presented in this film, but for those who fancy queer yet engrossing films then you better check this out!
Like this Review?
Write your own review?
DooVOTE
Not for me
Like this Review?
Write your own review?
COMMENTS 0
Your Comment...