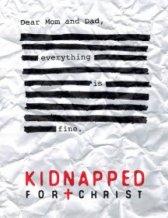 Kidnapped for Christ
USA, 2014, 85 minutes, SD Documentary, LGBT, US Indie
This documentary was originally meant to be informational when director Kate Logan collected footage while at Escuela Caribe but turns out, there's more than meets the eye. This so-called behavior modification school situated in the Dominican Republic has been a sort of reform school for American youth who are deemed wayward or gay.  These teens are removed / abducted with consent from their very own parents.  What's supposed to be  intensive behavior therapy practices seem to reveal a lot more, including emotional abuses.  There are various interviews in this film, from the students  to people running the school and from the director herself.  There are facts that are eye-opening and some would even find it shocking. Don't fail to check this out!
Like this Review?
Write your own review?
DooVOTE
Not for me
Like this Review?
Write your own review?
COMMENTS 0
Your Comment...