Image from: Mindfulness and Murder (2011) 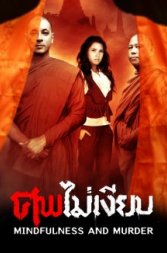 Mindfulness and Murder
Thailand, 2011, 86 minutes, HD Drama, Crime, Thriller, Asian
Well-crafted plot and with compelling performances! The film manifests signs right from the start that it's an effective mystery-crime story as the viewers go on a never-ending chase and guessing game but with no clear conclusion, just like the central character, Father Ananda, portrayed by Vithaya Pansringarm.  As a mystery/suspense thriller fan  I got hooked with the movie, from beginning to end. Father Ananda's grit and determination to uncover and go after the killer led to very unlikely circumstances and the killer cobra was symbolically relevant as it slithers to its victim cunningly and viciously.  Hats off to V. Pansringarm for his magnetic and realistic acting performance as well as Wannasak Sirilak as the murderer monk. Very interesting to note that Pansringarm also co-wrote the screenplay of the film which was based on a novel by Nick Wilgus. While almost all of the cast portrayed their roles well I was so drawn to the boy who played the role of Jak, the polio-ridden assistant of Father Ananda. His performance was stellar and embodied the traits of an average child in all his playfulness and genuineness. Viewers will similarly be dazzled with his toothful smiles. This film deserves more than a 5-star rating not only for the clean sequence of scenes, outstanding cinematography but also for the emotions that it evoked upon its viewers.  Definitely, definitely a must-watch!
Like this Review?
Write your own review?
Add to List
Not for me
Like this Review?
Write your own review?
COMMENTS 0
Your Comment...
LIKES 1
marygracedimala
marygracedimala