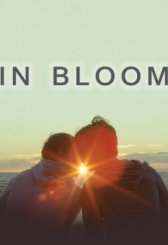 In Bloom
USA, 2013, 87 minutes, HD Romance, US Indie
There was a time when a gay film was about 'being gay' in some way.  They explored  the trials and tribulations of secret relationships, unspoken feelings, and anything connected to the  love that couldn't speak its name.   In the early days, someone always died.   That era has thankfully passed and has been replaced by films that reflect on life from a gay viewpoint.   This film is  obviously a relatively low budget affair, but it is very definitely in the upper echelons when it comes to production values.  There's some cracking camera work.  The art design is spot on and reflects the kind of semi-bleak dowdiness of being young and broke.   The acting is, for me, completely spot on - if it wasn't for the occasional bit of boy on boy  tonsil-tennis, they could pass as straight.  That's important for me.  Having never managed to be much of a gay cliche, to see 'real' gay boys depicted is both refreshing and powerful.   The story is nicely paced.  It reflects both the monotony and frenzy of being a twenty-something.  Within In Bloom, two guys are doing what everyone else has to do.  They're simply trying to get through their day and work things out.  It may depress a few to discover that life on the  other side of the gay rainbow isn't all sparkle dust.  But what we lose we reclaim in a depiction of what life is like when we take they 'the gay' out of gay film  and replace it with, simply, film - that happens to be gay .  That's powerful.
Like this Review?
Write your own review?
Add to List
Not for me
Like this Review?
Write your own review?
COMMENTS 2
Your Comment...
LIKES 2
MaeMaeDecena
snakeeyes
MaeMaeDecena
snakeeyes