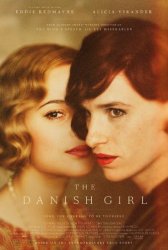 The Danish Girl
UK, USA, 2015, 120 minutes Drama, LGBT, Biopic
A huge disappointment. The film gets it wrong in almost every department. The casting of Matthias Schoenarts and Amber Heard is a small disaster, the script clunky and trite, the camera is too self aware, drawing attention to itself when not necessary, Lili's cooing and ah-ing over her initial encounter with women's clothes is so bizarre that it smacks of fetishism. The film begs us to care with its overbearing score, but we just keep drifting away, because criminally, it fails to understand Lili. We never see through her eyes. We are just told what she sees, in a sprinkling of whispy epithets. Redmayne isn't to blame, this would be a hugely challenging role to any actor - it is Hooper's inability to merge the two, and of course his script. A big budget film with a central trans protagonist (!), it was so important that this film got this portrayal right, which makes it all the more disappointing (in fact, I'm angry) that it didn't.
Like this Review?
Write your own review?
DooVOTE
Not for me
Like this Review?
Write your own review?
COMMENTS 0
Your Comment...
LIKES 1
laurenhurrell
laurenhurrell