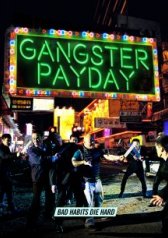 Gangster Payday
Hong Kong, 2014, 97 minutes, HD Thriller, Romance, Crime
For those of you familiar with the cinematic record of beloved Hong Kong actor Anthony Wong (which includes such crime-thriller classics as Infernal Affairs, Hard Boiled and Exiled), his new star vehicle Gangster Payday may not be quite what you’d expect. Granted, you might feel in familiar territory in the ruthless opening minutes, which see Anthony Wong and the young Wong You-nam smashing multiple bottles on the back of one man’s possibly deserving head. But once the story settles into its primary groove, it becomes something surprisingly casual, even peaceful, in a way that may feel jarring to those anticipating Hong Kong’s answer to John Wick. We get violence and vendettas to be sure but, for most of its running time, Gangster Payday isn’t so much a re-embodiment of the golden age of Hong Kong action films when John Woo and Ringo Lam ruled the scene but rather a bittersweet addendum. It looks back on the days of brotherly bloodshed and honourable vengeance with misty-eyed nostalgia as the heroes and antiheroes of old grow weary of the Triad life.That goes especially for Anthony Wong’s Brother Ghost, a retired crime boss who decides to invest in a small local tea house and brings all of his rambunctious Triad friends along with him in this new venture. His interest in this particular establishment seems to stem from the liking he takes to the tea house’s owner, Mei, who in turn has a thing for Wong You-nam’s Leung.This love triangle, for much of the film’s running time, serves as the principle conflict of the narrative and feels decidedly low stakes, amicably giving us room to settle in to the warm and humorous interactions between the aging mobsters and their new patrons and colleagues. Presented with an invitingly saturated colour palette and unobtrusive camera work, this is a leisurely film that would rather its characters hang out and play beer pong than get into unnecessary shoot-outs. Even most of the film’s more menacing moments feel like echoes or remnants of a time now passed.It’s the cinematic equivalent of a lazy summer afternoon grabbing drinks with an old friend but there’s an underlying melancholy to the proceedings that gives this footage sufficient weight. The comical scenes of Ghost’s long time colleagues eagerly trying to craft the perfect batch of pineapple buns carry the awareness that these once dangerous criminals are now products of another time, stuck for somewhere to be and something to do.This wistful and reflective tone holds up right until the third act, at which point Gangster Payday makes a sharp left turn that suggests that maybe we’ve been watching a gangster flick, rather than a post-gangster flick, all along. This brutal and tragic final stretch feels overly plotted, as though the film is trying to make up for the relaxed pacing that has characterised proceedings up to this point, and tonally inconsistent with that which came before it. Overall, the narrative shift in the final half hour seems like a slight misjudgement of why the film had been working up to that point but Anthony Wong is fortunately far too experienced in the field of criminal one-upmanship for the climax to flop, especially with a few similarly charismatic character actors at his side.So, in a sense, the biggest flaw of Gangster Payday is that it underestimates just how likeable many of its own characters are. We don’t need to see Anthony Wong and his contemporaries getting into knife fights when it’s more fun to see them complain about burnt toast and serve egg tarts to customers. More than any of the film’s old school-aping genre flourishes, it’s the small, heartfelt moments such as these that make Gangster Payday a charming tribute to classic Triad cinema.
Like this Review?
Write your own review?
Add to List
Not for me
Like this Review?
Write your own review?
COMMENTS 0
Your Comment...