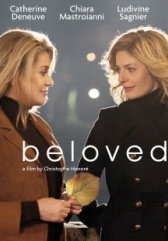 Beloved
France, 2011, 139 minutes, SD Drama, Romance, Musical, Arthouse
I strongly wanted to dislike BELOVED. Because it's too Parisian, too romanticized, too musical. And there I was, quite enjoying it in the end. Catherine Deneuve is and will always be a queen. She and her daughter, Chiara Mastroianni  (both in real life and in the film), achieve to give depth and contrasts to their characters, through honest dialogues and songs. I was however not convinced by supporting characters and the scenes set up during Madeleine's youth (played by Ludivine Sagnier) with her Czech husband (Rasha Bukvic) in the 60s, that I judged too nostalgic and unnecessary. Maybe the fact that Christophe Honoré escaped from Paris a little to explore London and Montréal gave some fresh air to what is mostly the same crew than LOVE SONGS. Still delving into the themes of love, sex and aging, Honoré brought more maturity to BELOVED accompanied by, at most times, well-written songs by Alex Beaupain. So here I am, kind of recommending this film. Mostly for Deneuve and Mastroianni.
Like this Review?
Write your own review?
DooVOTE
Not for me
Like this Review?
Write your own review?
COMMENTS 1
Your Comment...
LIKES 2
MaeMaeDecena
ClaudineC
MaeMaeDecena
ClaudineC